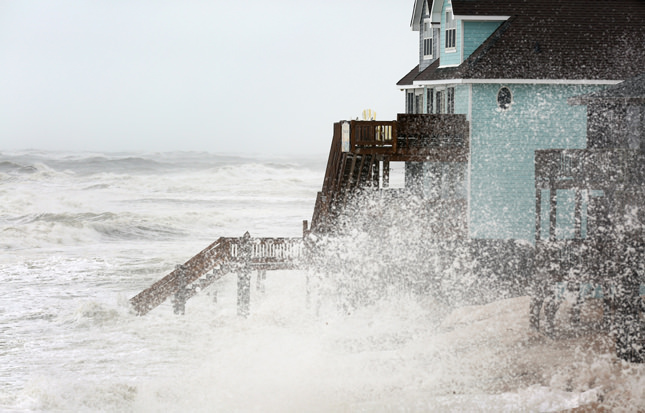 by German Press Agency - DPA
Oct 05, 2015 12:00 am
The eastern state of South Carolina braced for more rain Monday across the flood-ravaged state, while US Coast Guard vessels searched overnight for a cargo ship missing in the Caribbean Sea.

The 224-meter ship El Faro, was en route from Florida to Puerto Rico with 33 crew members when it was last heard from Thursday, as Hurricane Juaquin gained strength.

The coast guard said a search using ships and aircraft turned up life jackets, life rings, containers and an oil sheen in the search area, although the debris was not immediately confirmed as coming from the missing ship.

The airport in coastal Charleston, South Carolina's largest metropolitan area, reported 40 centimeters of rain since Friday, and some parts of the state measured rainfall up to 60 centimeters.

The Congaree River was at its highest flood stage since 1936, she said. The National Weather Service said several gauges to measure flood levels on the river were washed away.

Two dams on small lakes failed in the area around state capital Columbia, worsening flood conditions. All 375,000 water customers in the Columbia area were under a boil order, as flood damage compromised the safety of the treatment system.

A low-pressure system was stalled offshore in the wake of Hurricane Joaquin, funneling rain into the south-eastern United States.

The hurricane was some 1,000 kilometers off the US East Coast, battering Bermuda late Sunday as it passed just north-west of the island.

The hurricane damaged houses and uprooted trees in the Bahamas last week Atlantic Seaboard but followed a more north-eastward path than first expected, remaining far out in the ocean.

In Georgetown, near the northern coast, fire chief Joey Tanner said the city was "predominantly under water."

Curfews were in place overnight in much of South Carolina, and skies were not expected to clear until Tuesday.

The University of South Carolina in Columbia cancelled Monday classes.

Many roads were closed, including major interstate highways.

Authorities said there were five deaths in South Carolina, including some motorists who failed to heed warnings not to drive into deep water on flooded roads.

One mother and child were stranded, and an emergency worker who tried to rescue them become stranded himself, before the three were airlifted to safety.
Last Update: Oct 05, 2015 10:40 am