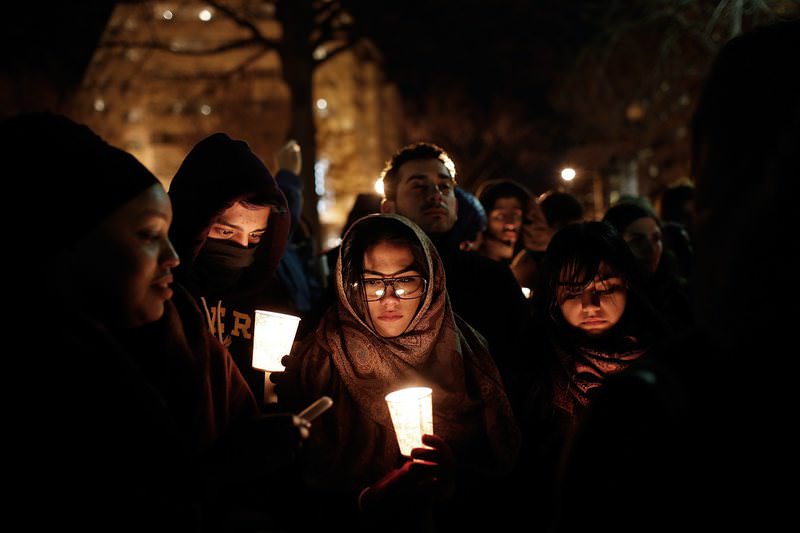 by Daily Sabah with AA
Oct 09, 2015 12:00 am
U.S. Muslim groups urged community leaders to strengthen safety measures ahead of potential anti-Islam protests planned across the country on Oct 10.

The Council on American Islamic Relations (CAIR) said several of the demonstrations may be armed and provocations such as Quran desecrations may occur.

"We've never had this many events at once targeting mosques in this kind of national way," said Heidi Beirich, who tracks hate groups at the Southern Poverty Law Center.

An anti-Islam campaign page on Facebook called Global Rally for Humanity -- has called on "fellow patriots" to organize rallies in front of mosques across the country on Saturday.

The campaign logo suggests that it is affiliated with a right-wing armed group called the Oath Keepers. The group describes itself as a "non-partisan association of current and formerly serving military, police, and first responders, who pledge ... to defend the Constitution against all enemies, foreign and domestic".

"The anti-Islam rallies come at a time of increased hate-motivated crimes and bias incidents nationwide targeting persons and property associated, or perceived to be associated, with Islam and the American Muslim community", CAIR said in a written statement.

As of Monday, rallies in at least 21 locations including Oklahoma City, Phoenix, Atlanta, Louisville, Dallas and Charleston have been planned on Facebook, with some organizers encouraging participants to utilize their Second Amendment right to bear arms.

"Be vigilant to exercise ALL of your constitutional rights!! It's way past time to stand up to the anti-human tyranny of Islam, and lest we forget, this is a mosque which has already produced documented terrorists!! [sic]", organizers of the Phoenix rally wrote on Facebook.

Some of the protests are planned to take place on Friday, the Muslim day of prayer, but many are scheduled for Saturday, when mosques are often filled with children going to religious class.

The U.S. security forces are working with the mosques and Muslim community centers to take necessary safety measures, as Muslims concerned about the vitriol of the protestors and the potential for violence.

Some mosques are hiring off-duty police to increase security while Muslim leaders are reviewing safety procedures.

"Many of these planned rallies may not take place, or they may consist of only a handful of people shouting slurs at worshipers," according to CAIR. "But given the recent endorsement of Islamophobia by national public figures, it would only be prudent for mosque and community leaders to prepare for any eventuality."

Adam Soltani, who directs the CAIR chapter in Oklahoma, where a rally is planned in front of the Islamic Society of Greater Oklahoma City, said the local Muslim community was concerned about the protest.

"More than anything else, there is a sense of disappointment that, in a country like America that was founded on the ideas of religious freedom and pluralism, something like this could take place in the first place", Soltani told Anadolu Agency.

He also called on the Muslim community to not engage with the protesters and to report anything suspicious to authorities.

The protests are planned to coincide with an Oct. 10 rally in Washington, D.C. called by the Nation of Islam leader Louis Farrakhan to mark the 20th anniversary of his Million Man March.

The gathering of black men in October 1995 was the largest rally U.S. rally since Martin Luther King's famous march on Washington in 1963, where he made his historic "I have a dream" speech.