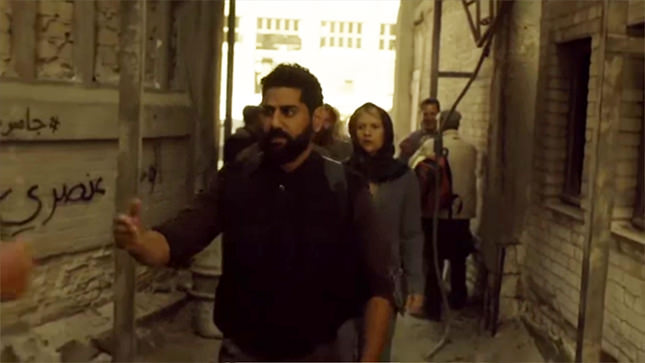 by Daily Sabah with AFP
Oct 15, 2015 12:00 am
Three graffiti artists, hired by the producers of hit U.S. drama series 'Homeland', pulled one of the most audacious stunts ever in art and media history, as they wrote "Homeland is Racist" on the set.

In the second episode of the 5th season of the series which aired in the U.S. earlier this week, main character Carrie Mathison, played by American actress Claire Danes, can be seen walking past a breeze-block wall on which is written in black spray paint: "Homeland is racist".

Other slogans called the show "a watermelon" - which is slang for not to be taken seriously- and included the social media hashtag #BlackLivesMatter, which has become the voice of outrage over US police killings of unarmed African Americans.

The irony in all this is that the hired trio, Heba Amin, Caram Kapp and Stone, was encouraged by producers to "come up with their own material" and the Arabic script was checked neither by editors nor by producers.

"We never thought the episode would air," said Kapp. "We thought someone would look in the edit and we were very surprised to find that this made it in," he added.

"We were given free rein over what we wrote so, we took the chance" said Kapp, adding that their intention was 'to generate a discussion'.

Kapp said he and his fellow artists were concerned they would be rumbled by producers on set, but said it was "an opportunity we wouldn't have been comfortable" to miss.

The trio was asked to mark up the walls of a set depicting a Syrian refugee camp for episodes of the show's fifth season, which were filmed in Berlin.

However, this isn't the first time the show has stirred controversy. It previously drew derision during its second season for featuring a joint plot between Al-Qaeda terrorists and Lebanese Shiite movement Hezbollah -- two groups currently waging fierce battles against each other in Syria.

Showtime, the series' makers, has yet to comment on the graffiti.