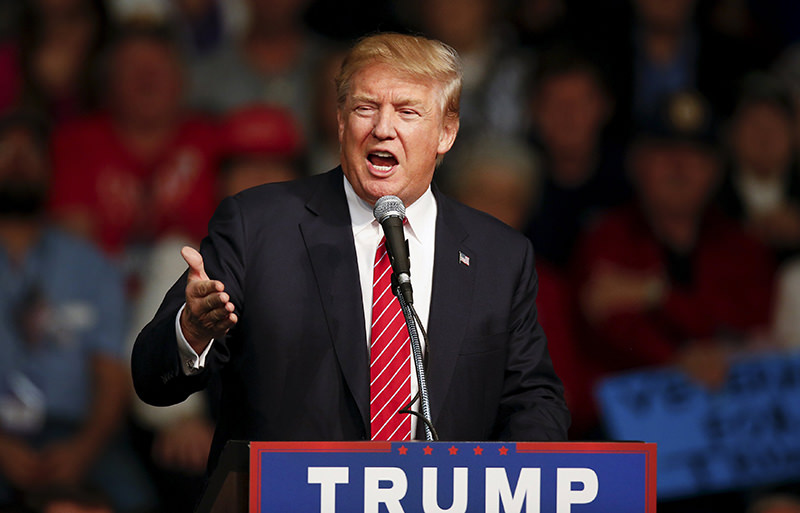 U.S. Republican presidential candidate Donald Trump speaks during a campaign event in Anderson, South Carolina (Reuters Photo)
by Anadolu Agency Oct 22, 2015 12:00 am
A U.S. Muslim advocacy group on Wednesday condemned Republican presidential candidate Donald Trump over his comments that he would consider closing some mosques within the U.S. in order to fight ISIS.

"Donald Trump's apparent willingness to close down American mosques that he deems 'extreme' is totally incompatible with the Constitution and our nation's cherished principle of religious freedom," said Robert McCaw, government affairs manager at Council on American Islamic Relations.

"The government should not be in the business of deciding what is acceptable free speech or religious belief. Donald Trump's off-the-cuff remarks are both un-American, and un-presidential," McCaw said in a statement.

In an interview on Wednesday with Fox Business news channel, Trump was asked whether he would launch similar anti-ISIS initiatives as the British government, which include cancelling passports of some and closing certain mosques.

"I would do that, absolutely, I think it is great," said Trump. "If you go out, you go fight for ISIS, you can't come back. Why can't you do it? You can do it here."

When program host Stuart Varney asked whether he could close a mosque given that U.S. laws protect religious freedom, Trump answered: "Well I don't know. I mean, I haven't heard about the closing of the mosque. It depends, if the mosque is, you know, loaded for bear, I don't know. You're going to have to certainly look at it."

In his statement, McCaw asked Trump to clarify what he meant and to elaborate on what criteria would be used to decide on the closure of any mosque.

The role of Islam in the U.S. has been one of the hot issues in the Republican presidential race.

In September, Republican presidential candidate Ben Carson said Islam is inconsistent with the U.S. Constitution and that he would not support a Muslim president.

His comments came just days after Trump failed to challenge an audience member at a campaign rally who called Muslims a "problem in this country" and asked: "When can we get rid of them?"