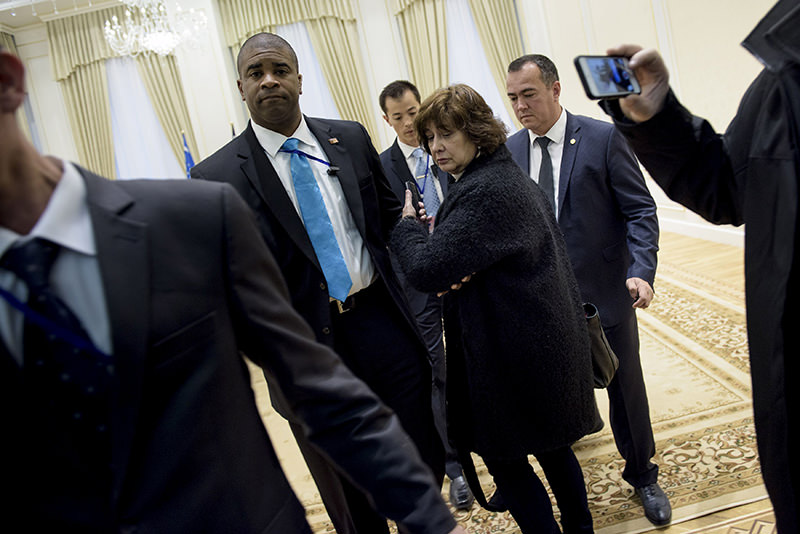 A US press pool reporter is escorted out after asking a question to Uzbek President Islam Karimov (not pictured) during a photo opportunity before a meeting with US Secretary of State John Kerry (Reuters Photo)
by Anadolu Agency Nov 03, 2015 12:00 am
Many on Monday are seeing a double standard in the U.S.'s attitude toward press freedom after a reporter was removed from a meeting with American and Uzbek officials.

A State Department spokeswoman was grilled by reporters about the removal of a Washington Post reporter after she began questioning Uzbekistan President Islam Karimov on human rights during a meeting Sunday with Secretary of State John Kerry.

Video of the incident in Uzbekistan shows U.S. and Uzbek security agents escorting the journalist from the room.

An American-accented voice is also heard saying "take her out," in the video, after the reporter asked her question, according to media reports.

The incident comes as the U.S. continues to press Turkey to take more steps for secure freedom of the press.

The U.S. congratulated the people of Turkey for their participation in Sunday's parliamentary election, however, it expressed "concern that media outlets and individual journalists critical of the government were subject to pressure and intimidation during the campaign."

State Department spokeswoman Elizabeth Trudeau was admonished not to invite journalists to events where they will not be allowed to freely ask questions.

"We travel all the way across the world to come to these rooms to get a question, and if you're gonna be pushing us out of the room, just don't -- you know what? Say don't invite us," the reporter said.

Trudeau said the Bureau of Diplomatic Security and press office would investigate the incident.

"Our press team and diplomatic security work hard around the world on these trips, as well as here in the department, to work for access for journalists," Trudeau said.

"However, we're not perfect. We're going to take a look at what happened, if there's ways that we can review and fix how we do these process we absolutely will."

Trudeau denied that the reporter's question was linked to her being removed.

"I would say categorically her removal had nothing to do with the content of the question," she said, calling it "a logistical issue".

She also noted that the event was not a news conference, where questions are expected, but rather a photo spray where the reporters can take only photos or shoot video-not ask questions.

Trudeau said journalists are escorted out after taking photos or shooting video and that the event was under way when the reporter asked her question.
Last Update: Nov 03, 2015 12:32 pm
RELATED TOPICS