Remains from 1945 US plane crash in Malaysia head home 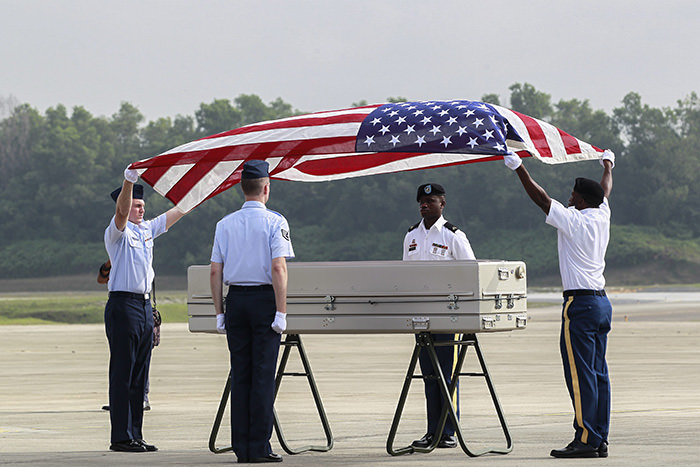 US military honor guards cover with the US flag a coffin containing human remains recoved from the crash in Subang, Malaysia (EPA Photo)
by Nov 05, 2015 12:00 am
Shortly after World War II ended, three US airmen took off from Singapore aboard a military transport on a flight to an airfield in northern Malaysia that never arrived.

Nearly 70 years later, the presumed remains of the US service members finally headed home on Thursday following a sombre ceremony in Kuala Lumpur.

US Defence Secretary Ashton Carter, on a diplomatic swing through Asia, was in attendance as four Malaysian soldiers handed over a small wooden box to US troops at the airport ceremony.

As troops saluted and Carter held his hand on his heart, the box was placed in a metal casket with a US flag unfurled across its top.

Two US airmen and two American soldiers acting as pallbearers carried the coffin into an enormous C-130 transport plane, which took off for Hawaii.

The handover of the remains marks the culmination of a decades-long effort to find out what happened to the plane and its crew: Flight Officer Judson Baskett, First Lieutenant William Myers and Private First Class Donald Jones.

Visibility was good on November 27, 1945, with only scattered showers forecast, as the C-47 military transport plane took off for Penang.

But after the plane disappeared and an extensive search failed to find anything, the young crew members were eventually declared dead.

According to World War II and Korean War historical charity PacificWrecks.com, wreckage was first spotted in 1966 on a Malaysian jungle mountain slope, but it was not investigated.

Two people came upon the wreckage in 1985, but it was not until 2009 when locals photographed the site that it was reported to the US embassy in Malaysia.

The United States suffered few lost service members in Malaysia as American troops were not involved in World War II military operations in the then-British colony, which was among territories invaded and occupied by the Japanese.

Recovery operations for the plane were postponed for various reasons over the years, most recently as Malaysia and the United States grappled with the disappearance of Malaysia Airlines Flight 370 in March 2014.

The presumed remains of the service men were finally recovered in August and September this year.

Though widely assumed to be the remains of the three missing airmen, US forensic experts will carry out further analysis to confirm their identities.
Last Update: Nov 05, 2015 5:18 pm
RELATED TOPICS