Bomb a 'possibility' in crash of Russian passenger plane, US President Obama says 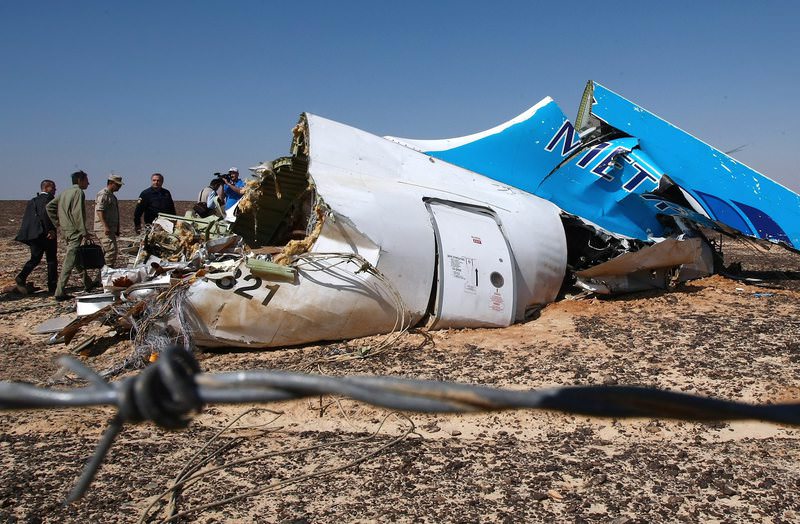 |EPA Photo
by Compiled from Wire Services
Nov 06, 2015 12:00 am
United States President Barack Obama said on Thursday there was a "possibility" that the crash of a Russian passenger plane in Egypt was caused by a bomb on board the airliner.

"I think there's a possibility that there was a bomb on board. And we're taking that very seriously," Obama said in an interview with KIRO/CBS News Radio that was quoted on CNN.

"We're going to spend a lot of time just making sure our own investigators and own intelligence community find out what's going on before we make any definitive pronouncements. But it's certainly possible that there was a bomb on board," he said.

Five days after a Russian jetliner broke apart high above the Sinai, Russia and Egypt on Thursday dismissed Western suggestions that a terrorist bomb may have caused the crash that killed 224 people, saying the speculation was a rush to judgment.

British Prime Minister David Cameron, who spoke to the presidents of both countries in the very public dispute, said he had grounded all British flights to and from the Sinai Peninsula because of "intelligence and information" indicating a bomb was the probable reason a Metrojet Airbus A321-200 plane had crashed Saturday in the desert.

British and U.S. officials, guided primarily by intelligence intercepts and satellite imagery, have suggested gingerly it might have been the work of the extremist Islamic State group and its affiliates in the Sinai.

"We don't know for certain that it was a terrorist bomb ... (but it's a) strong possibility," Cameron said.

Egyptian President Abdel-Fattah el-Sissi later stood beside him at a news conference following an awkward meeting. Cameron also spoke by phone with Russian President Vladimir Putin to explain that concern for the safety of British citizens had led the government to go public with its suspicions about a bomb.

Russia and Egypt insist the investigation into the crash must run its course before any conclusion is reached. The Metrojet plane crashed 23 minutes after taking off from the Red Sea resort of Sharm el-Sheikh for St. Petersburg with mostly Russians aboard.

The dispute arose after the U.S. and British intelligence was disclosed Wednesday, just as el-Sissi was heading to London on a previously planned visit his first as president.

Russia complained that intelligence gathered by London and Washington about its jetliner has not been made available.

If Britain had information about a bomb on the plane, it's "really shocking" that hasn't been shared with Russia, said Foreign Ministry spokeswoman Maria Zakharova, speaking in Moscow.

British officials declined to say what intelligence was shared with other countries.

U.S. and British leaders have stopped short of a categorical assignment of blame in the crash, but Cameron said it is "more likely than not" that the cause was a bomb.

The ISIS group, which has not generally pursued "spectacular" attacks outside its base in Syria, has claimed responsibility for bringing down the plane, but Russian and Egyptian officials say the claim was not credible.

Russia is conducting an air war in Syria against Islamic State militants who have promised retaliation.

Egypt stands to lose millions of dollars from its vital tourism industry. Its tourism minister, Hisham Zaazou, met with British officials in London to persuade them to reconsider the decision to suspend flights to Sharm el-Sheikh, the Egyptian state-run news agency MENA reported.

Caught in the middle are thousands of tourists stranded in Sharm el-Sheikh, unable to return home because flights have been suspended due to security concerns.

Britain sent a security team to the Sharm el-Sheikh airport to determine what changes are needed to make travel there safe, but Egyptian officials maintain there is nothing wrong with the facility, which each year welcomes thousands of tourists to the resort beside the crystal-clear Red Sea.

British Transport Secretary Patrick McLoughlin told Parliament that Egypt must put in tighter, long-term security measures before British flights will resume flying there on a regular basis. Short-term measures, including different luggage-handing arrangements, would allow the estimated 20,000 British citizens in the Sharm el-Sheikh area to fly home, he said.

El-Sissi said British officials had sent a security team to evaluate the airport 10 months ago and were satisfied with the results.

"They checked the security actions, they were happy with that," he told a Downing Street news conference through an interpreter.

"The investigation team does not have yet any evidence or data confirming this hypothesis," he said.

The Kremlin said Putin told Cameron it was necessary to rely on data yielded by the official crash investigation.

Putin's spokesman, Dmitry Peskov, said it was mere speculation to single out one possible explanation at this early point in the inquiry.

"One cannot rule out a single theory, but at this point there are no reasons to voice just one theory as reliable only investigators can do that," Peskov said in Moscow.

Russia's top aviation official, Alexander Neradko, said investigators are pursuing several theories into the crash, including looking for traces of explosives on victims' bodies, their baggage and the plane debris, as well as studying other "aspects linked to a possible terrorist attack."

He said the investigation is likely to take several months.

Metrojet suspended all flights of Airbus A321 jets in its fleet after the crash. The company has ruled out a pilot error or a technical fault as a possible cause, drawing criticism from Russian officials for speaking with such certainty too soon.

Images from U.S. satellites detected heat around the jet just before it went down Saturday, two U.S. officials told The Associated Press. The infrared activity could mean several things, including a bomb blast or an engine exploding because of a mechanical breakdown.

Another U.S. official briefed on the Metrojet crash told the AP that intercepted communications played a role in the tentative conclusion that the Islamic State group's Sinai affiliate had planted an explosive on the flight.

The official added that intelligence analysts don't believe the operation was ordered by ISIS leaders in Raqqa, Syria, but was possibly planned and executed by its affiliate in the Sinai. The U.S. officials all spoke on condition of anonymity because they weren't authorized to discuss intelligence matters publicly.

Philip Baum, editor of Aviation Security International, said a bomb could be placed on a plane in a variety of ways, including by someone with access or by those on catering teams or maintenance crews.

"The options are almost too many to consider," he said in a telephone interview from Gambia.

EasyJet said it will run nine flights from the Red Sea resort to London and one to Milan, while Monarch will have two scheduled flights and three additional flights. Neither carrier is operating passenger flights from the U.K. to Sharm el-Sheikh.

Cameron's office said additional security measures will be in place, including only allowing passengers to carry hand baggage, while checked luggage will be transported separately.

The government has said it could take a week to 10 days to bring home the 20,000 British tourists.

Italy's civil aviation authority said it asked Italian airlines to conduct their own extra security checks at the airport as a precaution.

At the airport, travelers lined up as usual for metal detectors, searches of luggage and X-rayed baggage.

"Belgium authorities are telling me that it's not safe in Egypt and they have to cancel the flight for safety reasons, which I think it is stupid because it is safe and there is no problem at all," said Belgian tourist Bart Tecker.

Anger among travelers may be boiling over. Emma Smyth said there was at least one confrontation between staff at the Aqua Blue hotel and a distraught English family that didn't want to pay for its extra days of lodging.

"The hotel set a charge and the tourists cannot understand why they are being charged," she said. "They said they should be allowed to stay, and with that, one man grabbed one of the managers they ripped his shirt, ripped his name-badge off and everything."

Very different emotions were on display in Russia.