Venezuela President Maduro's relatives arrested by US on drug charges 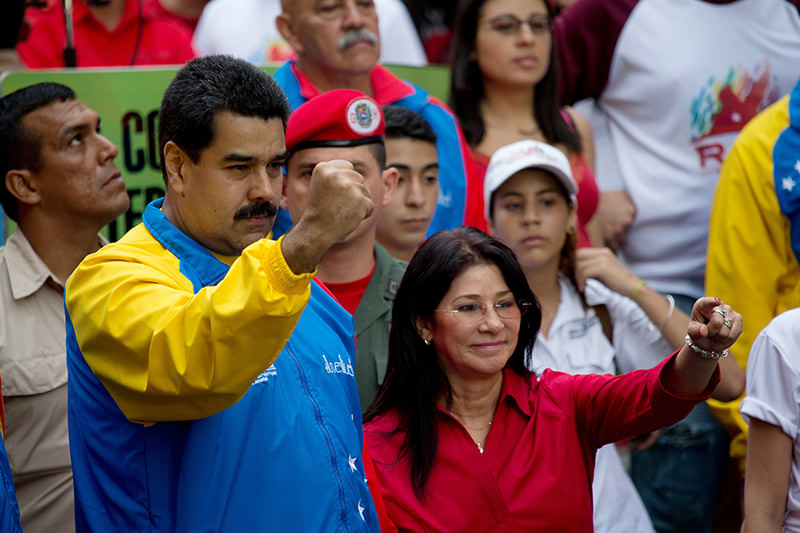 In this Oct. 18, 2014 file photo, Venezuela's President Nicolas Maduro and first lady Cilia Flores, greet supporters as they arrive for a march for peace in Caracas, Venezuela. (AP Photo)
by Compiled from Wire Services
Nov 12, 2015 12:00 am
The U.S. has taken into custody on drug charges two relatives of Venezuelan President Nicolas Maduro, according to the Wall Street Journal.

Two nephews of Venezuela's powerful first lady are facing arraignment in New York after being arrested in Haiti on charges of conspiring to smuggle 800 kilograms of cocaine into the U.S., people familiar with the case said.
The arrest of Efrain Campos and Francisco Flores is likely to exacerbate already tense relations between the U.S. and Venezuela and cast a hard look at U.S. accusations of drug trafficking at the highest levels of President Nicolas Maduro's socialist administration.

Flores and Freitas are identified in court documents as the nephews of Maduro's wife, powerful Venezuelan politician Cilia Flores.

Francisco Flores told U.S. authorities that he is the stepson of the Venezuelan president, having been raised by his aunt after the death of his mother.

He and Freitas are said to have contacted a DEA confidential informant in Honduras in October asking for assistance in trafficking of the cocaine, the journal reported, citing one of the individuals familiar with the matter.

The duo were planning to transport the contraband through an airport on the Honduran island of Roatan.

In a second meeting, Frietas and Flores took a kilogram of cocaine to the informant to show the quality of the product, which was to be sold in New York, according to the journal.

The meetings were recorded by DEA agents, the unnamed individual said.

Both anonymous individuals said Venezuela's consul general in New York has been in contact with the DEA regarding the arrests.

The incident could potentially imperil already tenuous U.S. ties with Caracas that have been marked by mutual hostility and distrust for over a decade.