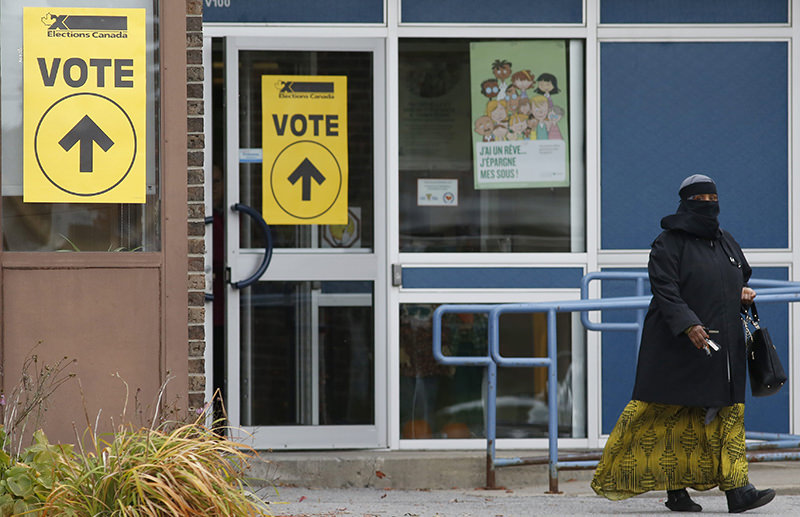 A woman wearing a niqab leaves the Ecole Marius-Barbeau polling station in Ottawa, after casting her vote in the Canadian federal election on Monday, Oct. 19, 2015 (AP Photo)
by Daily Sabah with AFP Nov 17, 2015 12:00 am
The new Canadian government led by Justin Trudeau withdrew on Monday Harper government's appeal to the high court of a decision that struck down a ban on the niqab and swayed the outcome of recent legislative elections.

Attorney General Jody Wilson-Raybould said she has notified the Supreme Court that the government has "discontinued its application for leave in the case."

"Canada's diversity is among its greatest strengths, and today we have ensured that successful citizenship candidates continue to be included in the Canadian family. We are a strong and united country because of, not in spite of, our differences," she said in a joint statement with Immigration Minister John McCallum.

A lower court ruling in support of a Muslim woman's right to wear the veil, which covers all of her face except the eyes, had become a hot-button issue four weeks before last month's legislative elections.

The prohibition against newcomers wearing the veil during citizenship ceremonies had been introduced by the previous Tory administration in 2011. But it was quashed by a lower court in September.

The ruling marked a pivotal turn in the election campaign.

The Tories' anti-niqab position helped swing the party back in the lead for a brief moment while the leftist New Democrats fell from first to third place in public opinion polls after coming out in favor of a woman's right to wear whatever she wants.

The Liberals shared the New Democrats' view on the issue but managed to avoid the backlash, and ended up winning the election in a landslide.

The court battle at the center of the controversy was brought by Toronto-area resident Zunera Ishaq, who argued successfully that the ban violated her religious freedoms under Canada's Charter of Rights and Freedoms.

Originally from Pakistan, Ishaq arrived in Canada in 2008 and passed her citizenship test in 2013. But she refused to participate in the oath-reciting ceremony because she did not want to do it with her face uncovered.