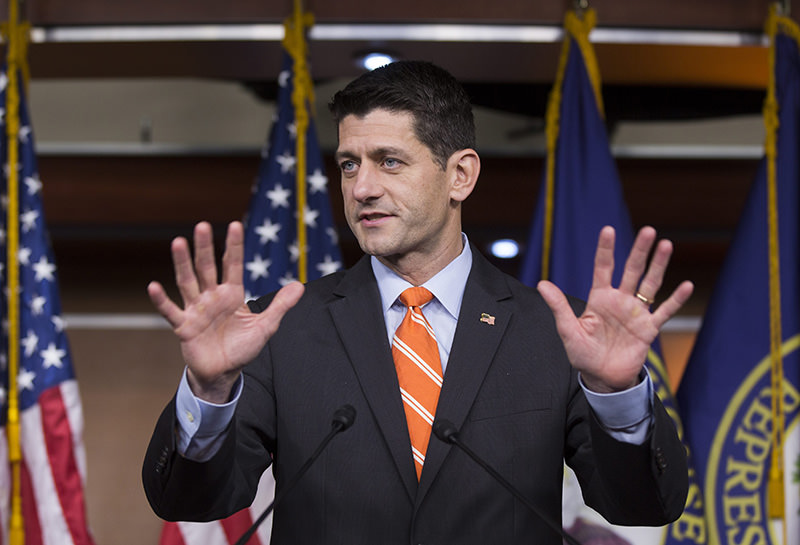 US Republican Speaker of the House Paul Ryan speaks in the US Capitol after the House passed the Highway Bill, 05 November 2015 (EPA photo)
by Compiled from Wire Services Nov 17, 2015 12:00 am
US House Speaker Paul Ryan on Tuesday called for a pause in a White House program to settle Syrian refugees in the United States, citing security fears in the wake of the Paris attacks.

The Republican speaker joined half of US state governors in urging President Barack Obama to suspend the scheme, calling for a full review of the vetting process to ensure that terrorists do not slip into the country among the refugees.

"This is a moment where it is better to be safe than sorry. So we think the prudent, the responsible thing is to take a pause in this particular aspect of this refugee program in order to verify that terrorists are not trying to infiltrate the refugee population," he said at a news conference.

He also said that last Friday's attacks in Paris were "an act of war."

In the immediate aftermath of the coordinated assaults in Paris, which killed at least 129 and injured 352 more and for which DAESH has claimed responsibility, conservative presidential candidates Donald Trump and Ted Cruz called on the Obama administration to reconsider plans to allow thousands of Syrian refugees to be resettled in the United States.

"With the problems our country has, to take in 250,000 people, some of whom are going to have problems, big problems, is just insane," Trump said at a rally Saturday in Beaumont, Texas.

In an interview with Fox News, Cruz, a senator from Texas, called taking in refugees "lunacy."

The White House aims to increase to 10,000 the number of Syrian refugees accepted in the United States during fiscal year 2016, from the less than 2,000 accepted in the previous year.

Another Republican contender, Carly Fiorina, criticized the Obama administration for not building a stronger coalition in the Middle East in the fight against DAESH.
Last Update: Nov 17, 2015 5:53 pm
RELATED TOPICS