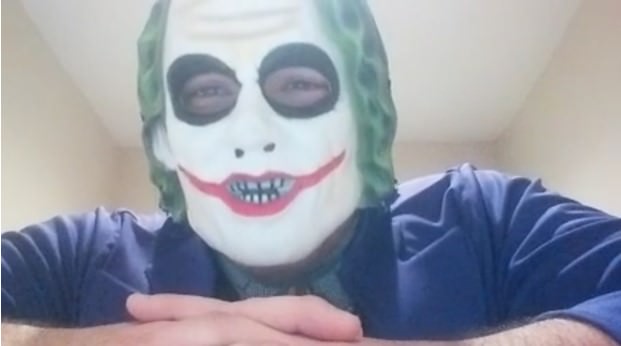 | Youtube
by Nurbanu Kızıl
Nov 18, 2015 12:00 am
Montreal police arrested a man, who released a video on YouTube, threatening to kill Muslims and Arabs throughout Quebec province, in response to the recent terrorist attacks carried out by Daesh which killed over 130 people in Paris. The arrest follows a week of rise in Islamophobic incidents in Canada, which is renowned for embracing its multicultural and diverse society.

Speaking in French, the unidentified man wearing a Joker mask in the video expressed his frustration with Muslims and said that he would take action, as he claimed 'the government would not do anything about them.'

He stated that a group of people would help him reach his goal, which was to kill one Muslim or Arab every week, starting next week.

The video, which was posted on Tuesday, was reportedly flagged by YouTube users, who urged Montreal police, as well as Quebec police 'Sûreté du Québec' to take action.

"Starting next week, there will be murders throughout Quebec" said the man, and added "we will eliminate all of them, one by one."

The voice of a baby crying in the background could be heard in the video.

The man also had a gun in his hand, and pledged to 'fire a bullet in the head of one Arab per week' while he said that he was serious about his threat.

In response to the Islamophobic threats, Montreal police released a statement, saying that there would be concrete consequences in the real world if people make threats on social media, adding that the Canadian Criminal Code allows police to press charges against such actions.

On Monday, a Muslim woman was assaulted by two male suspects while trying to pick up her children from an elementary school in Toronto's North York district.

"These vicious and senseless acts of intolerance have no place in our country and run absolutely contrary to Canadian values of pluralism and acceptance" he said, and added that diversity is Canada's strength.

The Canadian Prime Minister noted once again that the government and police will continue to protect victims' rights, while he asked Canadians to unite, not divide, amid threats of global terrorism.