Rift over Syrian refugee resettlement in US divides Republicans 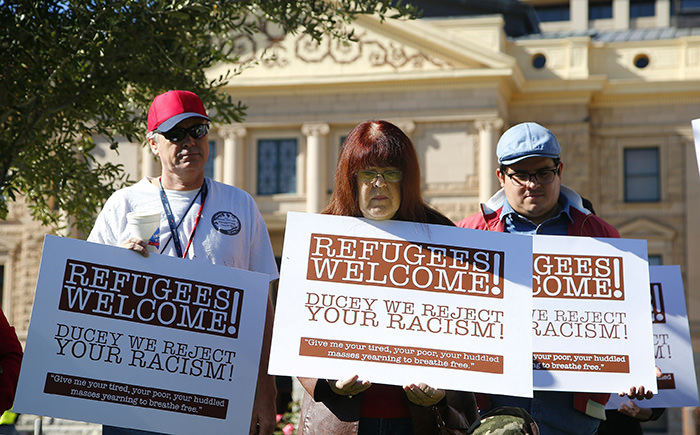 Supporters for the welcoming of Syrian refugees pause during a rally at the Arizona Capitol Tuesday, Nov. 17, 2015, in Phoenix. (AP Photo)
by Associated Press
Nov 18, 2015 12:00 am
Some Republicans are pushing back against aggressive opposition in their party to Syrian refugees resettling in the U.S., in fresh evidence of a rift that threatens to complicate the party's outreach to minorities heading into the 2016 presidential contest.

These Republicans have joined Democrats who liken the refugee backlash to the U.S. government turning away Jews fleeing Nazi Germany and placing Japanese in internment camps during World War II. While conservatives cite security concerns following the Paris attacks that may have involved Syrian refugees, others in the party fear the party's position in Congress and state capitals across the country reeks of xenophobia.

"A refugee is someone who has a credible fear that they're going to be killed," said Alfonso Aguilar, a Republican who served in the George W. Bush administration and now leads the Latino Partnership for Conservative Principles. "To close the door reminds me of FDR not letting Jews land in the U.S. during the years of Nazi Germany. Where are they going to go?"

Aguilar said moderate voters who hold outsized influence in general elections could view Republican opposition as extreme and intolerant. He warned that could haunt the Republican Party in next fall's general election. But Republicans pressing for a pause in the refugee influx see a need to be mindful, too, about fears of an attack on U.S. soil days after the deadliest assault in France in 70 years.

A number of presidential candidates, governors and Senate Republicans have issued calls to delay or stop accepting Syrian refugees, pointing to indications that one of the perpetrators in Friday's attacks might have entered France with a Syrian passport. Legislation introduced by Kentucky Sen. Rand Paul, a Republican presidential candidate, could allow Republicans to block President Barack Obama's goal of bringing 10,000 more Syrian refugees to the U.S. during the current budget year.

"Filling your country up with people who have a completely different belief system ... and expecting they won't rise up against their benefactor is foolish," Rep. Steve King of Iowa, a leading immigration hardliner, said in an interview Tuesday. He added that no refugees should be permitted into the U.S. from Syria "unless they be Christian refugees that are facing genocide."

That's exactly the kind of message Republican leaders hoped to avoid after a disastrous 2012 election in which minority voters shunned Republican candidates in near-record numbers. While there are few Muslim voters in America, the pointed Republican resistance against Muslim refugees comes as party leaders try to win over other minority groups.

The Republican National Committee outlined a series of recommendations after the last presidential contest calling for a more welcoming and inclusive tone on divisive issues such as immigration.

"The perception that the (Republican Party) does not care about people is doing great harm to the party and its candidates on the federal level, especially in presidential years," the RNC's Growth and Opportunity report found. "It is a major deficiency that must be addressed."

One of the report's authors, RNC committeeman Henry Barbour, said Tuesday that it's "common sense to tap the brakes" on Syrian refugees given security concerns, but "people need to be careful with their tone."

"This is about safety," Barbour said. "This isn't about keeping out this religion or that religion."

Former New Hampshire Republican Party chairman Fergus Cullen said there is "a little bit of ugliness" around the refugee debate.

"A specific group of refugees is being treated differently because of their country of natural origin and faith," he said. "This is inconsistent with America's history and our founding creed. That is alarming."

It's not exactly like rounding up Japanese Americans into internment camps during World War II, Culllen continued, "but it's the same line of thinking" that feeds "immigrant bashing."

The U.S. has admitted fewer than 2,200 Syrian refugees since Oct. 1, 2011, and the process for entering this country as a refugee is lengthy. Obama administration officials insist the vetting is good and there is no need to back down from the goal of admitting 10,000 more refugees this year.

The administration announced that goal earlier in the fall after a photograph of the body of a little Syrian boy washed up on a beach sparked calls for compassion, including from some congressional Republicans. Sen. Lindsey Graham of South Carolina, a Republican candidate for president, was one of those who supported accepting more Syrian refugees. This week, he called for a "timeout" in such admissions.

Many Republican candidates, already skeptical if not hostile to welcoming refugees, came out even stronger in recent days. Donald Trump said the U.S. should increase surveillance of mosques, consider closing any tied to radicals and be prepared to suspend some civil liberties.

Ben Carson said, "Until we can sort out the bad guys, we must not be foolish." Regarding Syrians already in the U.S., he added: "I would watch them very carefully."

Tea party leader Mark Meckler said there should be no room for debate.

"Anybody who takes a soft stance on this is out of touch with the electorate and out of touch with the common sense," he said, condemning those Republicans calling for tolerance. "I think that's absurd and shows why people from that wing of the party are now the fringe."
Last Update: Nov 18, 2015 1:34 pm