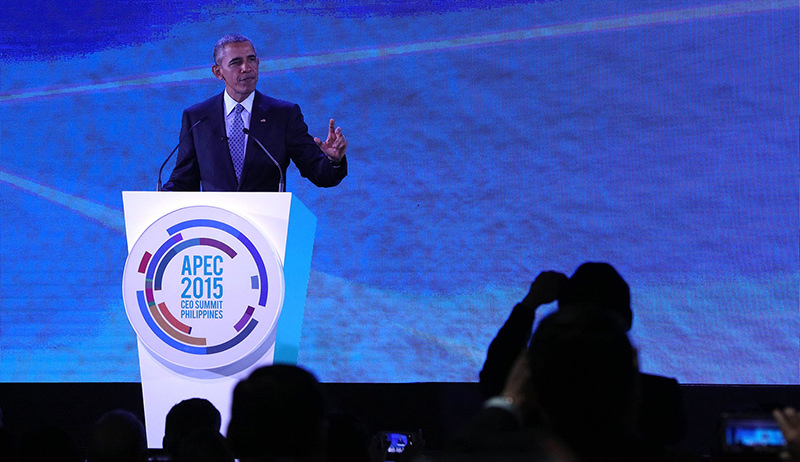 | AA Photo
by Compiled from Wire Services
Nov 19, 2015 12:00 am
U.S. President Barack Obama said on Thursday that that Assad must go to end the civil war in Syria.

Obama, who is in Manila to attend the annual Asia-Pacific Economic Cooperation summit also said he could close the Guantanamo Bay prison in Cuba while keeping Americans safe, but acknowledged he would likely face tough resistance from Congress.

He said that the jail had become a recruiting tool for groups like Daesh, which claimed responsibility for last week's Paris attacks.

US held firm to its calls for Assad's departure, with President Barack Obama insisting Thursday that the war could not end unless the Syrian leader steps down.

"I do not foresee a situation in which we can end the civil war in Syria while Assad remains in power," Obama said.

Top diplomats from 17 countries met in Vienna Saturday to discuss a way out of Syria's nearly five-year conflict, which has left more than a quarter of a million people dead.

They produced a two-year timetable: a transitional government would be formed and a new constitution written within six months, to be followed by internationally monitored elections within 18 months after that.

But in a television interview with Italy's Rai television, Assad said there could be no transition schedule for elections while swathes of Syria remained out of government control.

"This timetable starts after starting defeating terrorism. You cannot achieve anything politically while you have the terrorists taking over many areas in Syria," he said.

"If we talk after that, one year and a half to two years is enough for any transition."