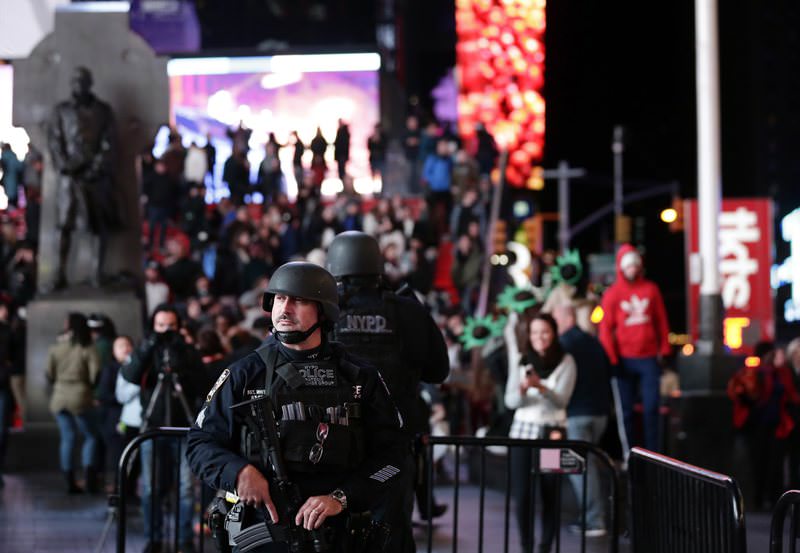 Members of the New York City Police Strategic Response Group are seen in New York's Times Square, USA, 13 November 2015. (EPA Photo)
by Daily Sabah with Reuters
Nov 19, 2015 12:00 am
Daesh terrorists have recently released a video, threatening to carry out suicide attacks in New York City, almost a week after the deadly attacks in Paris which killed over 129 people.

The Daesh video, which runs for nearly six minutes, includes a scene that appears to show a suicide bomber making preparations and zipping up a jacket, according to a description provided by SITE Intelligence Group, a Bethesda, Maryland, organization that tracks militant groups.

The clip briefly shows Times Square and Herald Square, two Midtown Manhattan crossroads popular with tourists, and a suicide bomber holding what appears to be a trigger. Most of the footage is scenes of Paris and French President François Hollande.

"Footage of New York shown in the ISIS video was taken from a video released by the group in April of this year. So while NYC is, and has been, a target for ISIS, today's video does not warrant any kind of panic," SITE director Rita Katz said in an email to Reuters.

There is no "specific and credible threat" against New York City, despite a newly released Daesh video suggesting America's most populous city is a potential target of attacks such as those in Paris, Mayor Bill de Blasio said on Wednesday.

Police Commissioner William Bratton agreed with the mayor during an evening news conference by both men outside a police precinct in Times Square, adding that there was nothing new about the video, which he called "hastily produced."

"There is no credible and specific threat against New York City," de Blasio said, encouraging New Yorkers to "go about their business" as normal, while remaining watchful.

Daesh has claimed credit for Friday's attacks in Paris that killed 129 people in shootings and suicide bombings at a concert hall, restaurants and a soccer stadium in Paris.

The assault on the French capital stirred memories in New York of the Sept. 11, 2001, hijacked plane attacks that felled the World Trade Center's Twin Towers, killing more than 2,600 people.


De Blasio said New York City's police force of 35,000, the country's largest, was working tirelessly to keep the city safe from another attack.

"Just in this last week, we've initiated the first wave of our new Critical Response Command, which will grow to 500 officers specifically dedicated to anti-terrorism activities," he said.

The FBI said through a spokeswoman it was aware of news reports about the video and "ongoing terrorist threats to NYC," and would fully investigate.