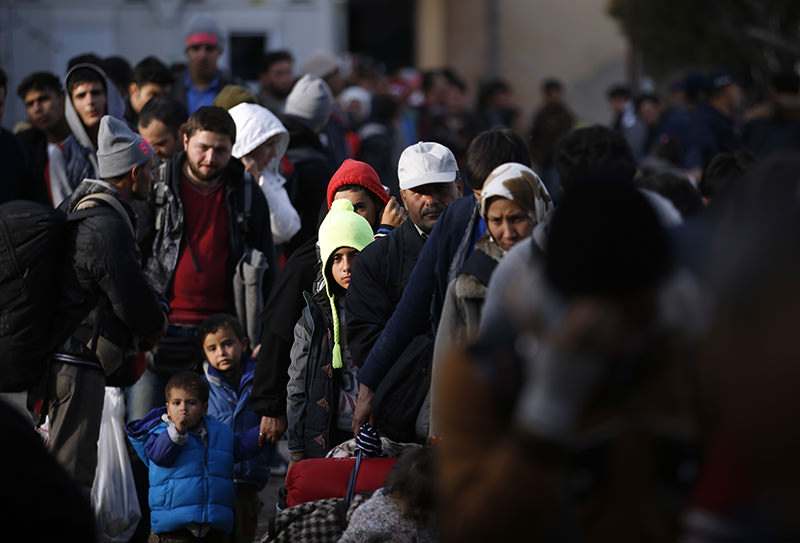 Migrants wait to register with the police at a refugee center in the southern Serbian town of Presevo, Monday, Nov. 16, 2015 (AP photo)
by Daily Sabah with Agencies
Nov 20, 2015 12:00 am
CNN on Thursday has suspended global affairs correspondent Elise Labott for two weeks, after the reporter described the U.S. House's passing bill pausing Syria refugee program as "Statue of Liberty bowing her head in anguish" in a tweet.

The U.S. House of Representatives passed legislation on Thursday to tighten security screenings for Syrian and Iraqi refugees and suspend President Barack Obama's program to admit 10,000 of them in the next year, defying a White House veto threat.

The vote was 289 to 137 for the measure. The vote was largely along party lines, although dozens of Obama's fellow Democrats broke with the White House to vote for the bill.

The CNN correspondent Labott, who has been reportedly working for the network since 2000, commented on the issue with a tweet [which is still up] as follows: "House passes bill that could limit Syrian refugees. Statue of Liberty bows head in anguish."


CNN has a strict policy for journalists not to reveal their views on social media, stating: "If you publicly declare your preference for issues or candidates or one side or the other of the public policy issues CNN reports on, then your ability to be viewed as objective is compromised."

Carson, a retired neurosurgeon and a top contender in his party's 2016 race for the White House, made the remarks at a campaign stop in the southern U.S. state of Alabama.

"We must balance safety against being a humanitarian," Carson said as he talked about admitting Syrian refugees into the United States.

"If there's a rabid dog running around your neighborhood, you're probably not going to assume something good about that dog. And you are probably going to get your children out of the way.

"Doesn't mean you hate all dogs, by any stretch of the imagination," he said. Carson called for immigration "screening mechanisms that allow us to determine who the mad dogs are."
Last Update: Nov 20, 2015 3:38 pm