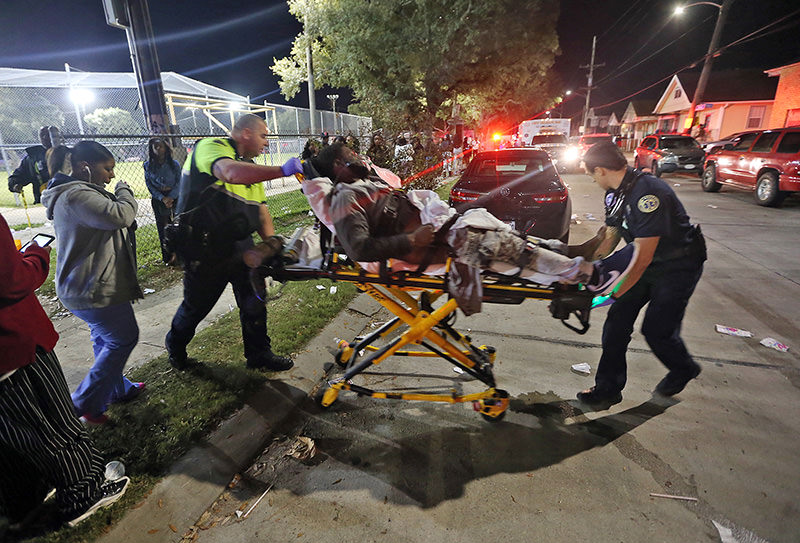 |AP Photo
by Nov 23, 2015 12:00 am
A gunfight between two groups erupted on Sunday in a New Orleans park where hundreds of people were gathered for a block party and the filming of a music video, leaving 16 people wounded, police said.

Circumstances surrounding the shooting in the city's Upper Ninth Ward, and details of what precipitated the violence, were not immediately clear, but New Orleans Police Department spokesman Tyler Gamble told Reuters no fatalities were reported.

Asked whether gang activity was thought to be involved, Gamble said it "was still too soon to say."

"We know, by speaking with some of the victims, that there were two groups of people shooting at each other," Gamble said.

Witnesses told police that both groups involved in the gun battle fled the park on foot immediately after the shooting, police said in a statement. No arrests were immediately reported.

According to the statement, 10 gunshot victims were taken to area hospitals by ambulance, and six more arrived at emergency rooms "via private conveyance."

Gamble said each of the 16 victims suffered either a "direct gunshot wound" or a "graze wound" and all were listed in stable condition, though the full extent of their injuries was still to be ascertained. Police said they did not have the age or genders of the victims.

The incident unfolded at about 6:15 p.m. Central Time at the Bunny Friend playground, following a community "second line" parade that ended a few blocks away earlier in the day, police said.

Several hundred people were gathered in the park at the time for an unpermitted block party and the impromptu filming of a music video, according to police.

New Orleans police Commander Chris Goodley, speaking in a video clip posted by the New Orleans Times-Picayune website, said the crowd at the park remained "orderly" after the shooting. "But we were trying to preserve the crime scene as best as we could and tend to the victims," he added.

New Orleans Police Superintendent Michael Harrison also was quoted by the Times-Picayune as saying, "no one has died at this time."

Three witnesses told the newspaper they saw a man with a silver-colored machine gun, and also heard more gunshots coming from within the crowd as he ran away. Several people were lying on the sidewalk after the shooting, it said.

WVUE-TV said police believed the shooting stemmed from a fight.