No specific and credible threat to US ahead of Thanksgiving: Obama 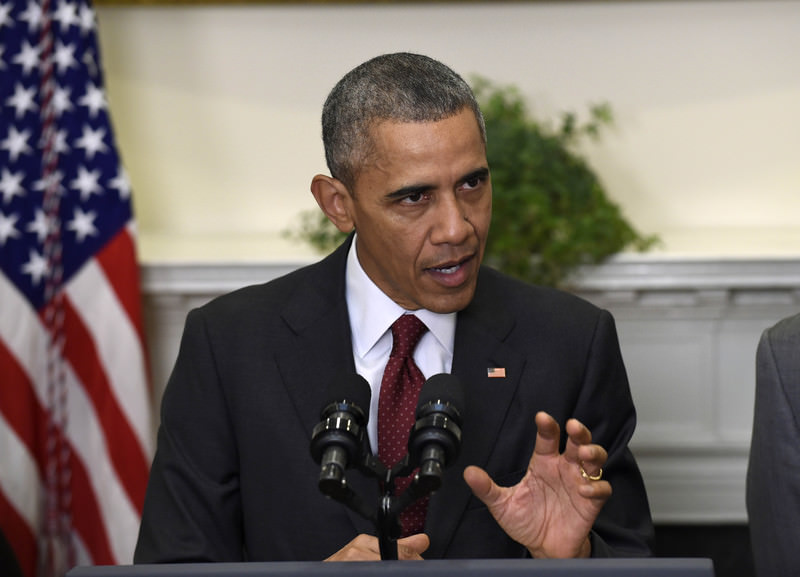 President Barack Obama speaks in the Roosevelt Room of the White House in Washington, Wednesday, Nov. 25, 2015. (AP Photo)
by Nov 25, 2015 12:00 am
U.S. President Barack Obama sought to reassure Americans they are safe on Wednesday as millions of people embarked on their annual Thanksgiving travels, with security at airports, New York City's parade festivities and other venues expected to be heightened amid jitters after the Paris attacks.

"We know of no specific and credible intelligence indicating a plot on the homeland," Obama told reporters at the White House, flanked by his top counterterrorism and national security advisers.

"We are taking every possible step to keep our homeland safe," he said.

The FBI sent a bulletin earlier this week to police departments across the country warning of possible copycat incidents and sharing intelligence on how the assailants in Paris carried out attacks on Nov. 13 that killed 130 people.

However, New York City officials have stressed there is no specific threat to the city, despite a video released last week by the militant group Islamic State that included images of New York. Islamic State has claimed responsibility for the Paris attacks.

The Department of Homeland Security also said last Friday that there was no credible threat to the United States like the attacks in Paris.

Nearly 46.9 million Americans will travel over the Thanksgiving long weekend - the busiest U.S. travel holiday of the year - with 3.6 million going by plane, according to the AAA, a motorist advocacy group.

Some travel analysts expected airport delays as a result of the heightened security. Officials at the Transportation Security Administration, which oversees airport security, declined comment.

As many as 3.5 million people were expected to line the 2.5 mile (4-km) route of the Macy's Thanksgiving Day Parade in New York City on Thursday, according to parade organizers. Many were expected to head to Manhattan's Upper West Side on Wednesday to watch the giant parade balloons being inflated on the eve of Thursday's parade.

"There remain no credible and specific threats against New York City," Mayor Bill de Blasio told reporters on Monday. "I'm very, very confident in the NYPD's preparation for the parade."

The 89th edition of the parade, which features 8,000 performers, kicks off holiday events in the city, including the lighting of the enormous Christmas tree at Rockefeller Center next week and the New Year's Eve celebration in Times Square.

More than five million visitors come to the city between Thanksgiving and New Year's Eve, according to the city's tourism agency. Chris Heywood, an agency spokesman, said all events are "business as usual."