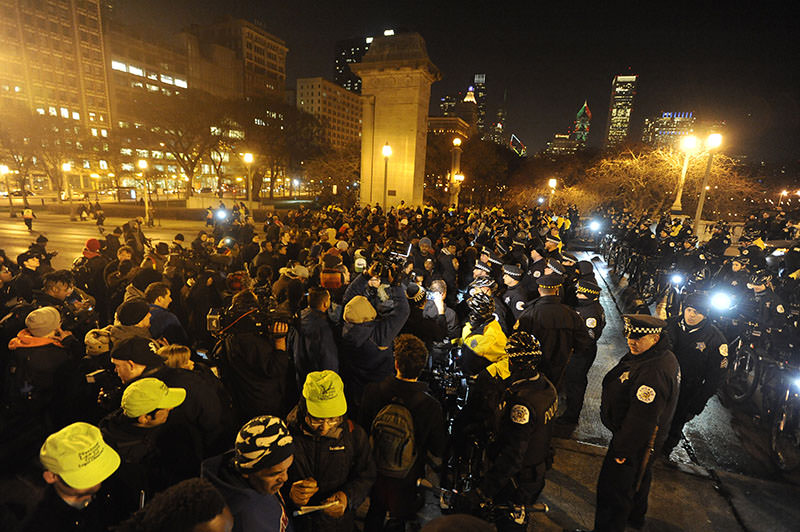 Chicago Police form a line to keep a protest for 17-year-old Laquan McDonald from entering Grant Park, early Wednesday, Nov. 25, 2015 (AP Photo)
by Daily Sabah with AFP Nov 25, 2015 12:00 am
Racial tension soared in Chicago Tuesday as officials released a graphic video of a police officer shooting a black teen 16 times, shortly after he was charged for the death.

The "chilling" video is the latest in a string of police shootings caught on camera that have sparked mass – and sometimes violent – protests and engulfed the United States in a debate over racism and the use of deadly force by police. Dozens of demonstrators marched through the city's busy streets, but there were only small scuffles with law enforcement and three arrests reported by early yesterday morning. The dashcam video shows officer Jason Van Dyke open fire on Laquan McDonald, 17. "It is graphic, it is violent, it is chilling," Cook County State's Attorney Anita Alvarez told reporters after charging Van Dyke with first degree murder. "To watch a 17-year-old young man die in such a violent manner is deeply disturbing, and I have absolutely no doubt this video will tear at the hearts of all Chicagoans.

Shot from an approaching police vehicle, it shows McDonald run down the middle of the street towards a cruiser, hitch up his pants and then start to walk away from Van Dyke and his partner. His body then spins and strikes the pavement. McDonald lifts his head, moves an arm and then a cloud from another gunshot rises up from his chest as he lays in a fetal position. He does not move as an officer enters the frame just long enough to kick a knife away from his prone hand.

None of the officers approach McDonald to try to help him, as he bleeds out on the street, writhing once in the remaining minute of video. Prosecutors said Van Dyke opened fire just 30 seconds after his cruiser pulled up to the scene and six seconds after stepping out of it.
McDonald – who was holding a knife when he was shot and had earlier slashed the tires of a police cruiser – made no threatening gestures to justify the use of deadly force, Alvarez said. It was the first time a Chicago police officer has been charged with first-degree murder for an on-duty fatality in more than 30 years, the Chicago Tribune reported.

Mayor Rahm Emanuel appealed for calm and said he hoped the city could use the incident as an opportunity to "build bridges of understanding" between police and young men like McDonald. "We as a city must rise to this moment," he told reporters. Police Superintendent Garry McCarthy said that while "people have a right to be angry" and to protest peacefully, his officers would be "intolerant of criminal behavior."
McDonald's family joined community leaders and city officials in appealing for calm. "No one understands the anger more than us, but if you choose to speak out, we urge you to be peaceful," they said in a statement released to local media. "Don't resort to violence in Laquan's name. Let his legacy be better than that."

The city approved a $5 million settlement for McDonald's family in April. Police had initially said McDonald was high on PCP, acting erratically and lunged at the officers with a knife.

U.S. has been witnessing nation-wide protests that were sparked by police brutality and racial discrimination toward blacks. Racially motivated protests across the country have shaken the U.S., as more people demand justice and an end to the discrimination of black Americans. According to data collected by the activist group Killed by Police, nearly 1,500 confirmed police-involved deaths have occurred in the country since January 2014. The actual figure is likely much higher, as there is no verified U.S. database of police shootings.
Last Update: Nov 25, 2015 3:58 pm
RELATED TOPICS