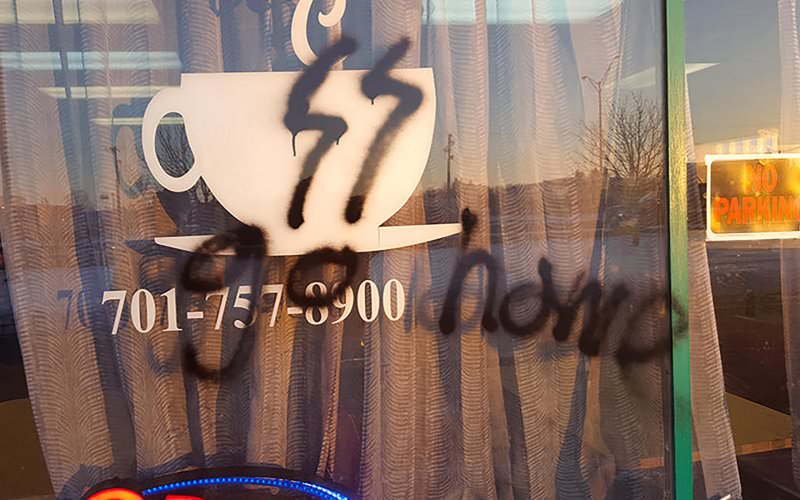 (WDAZ Photo)
by Nurbanu Kızıl Dec 14, 2015 12:00 am
A restaurant owned by a Somali-American man in North Dakota became the victim of an arson attack on December 8, reports have said.

The perpetrator, a 25 year-old man by the name of Matthew Gust had initially written 'go home' and the Nazi SS sign on the restaurant's window, before he set it on fire.

The police are looking for Gust, who will be charged for deliberately setting the restaurant on fire, and have said that the exact motive of the incident will only be revealed after they find the suspect.

On December 12, the Minnesota chapter of the Council on American-Islamic Relations (CAIR-MN) released a statement and "called on the FBI to investigate arson and vandalism of the Juba Coffee House, a popular Somali restaurant in Grand Forks, N.D., as a hate crime."

The statement referred to the fire department's remarks, which noted that the fire was "incendiary and suspicious in nature."

CAIR urged federal officials to launch a probe into the attack and treat it as hate crime, while calling on local security officials to scale up patrols around mosques and religious centers.

"The lives of American Muslims have been placed in danger by the rising anti-Muslim hysteria in our nation and by the inflammatory rhetoric used by a number of national public figures" said CAIR-MN Executive Director Jaylani Hussein.

There has been an increase in Islamophobic attacks against Muslims following the terrorist attacks in Paris and California mass shooting.