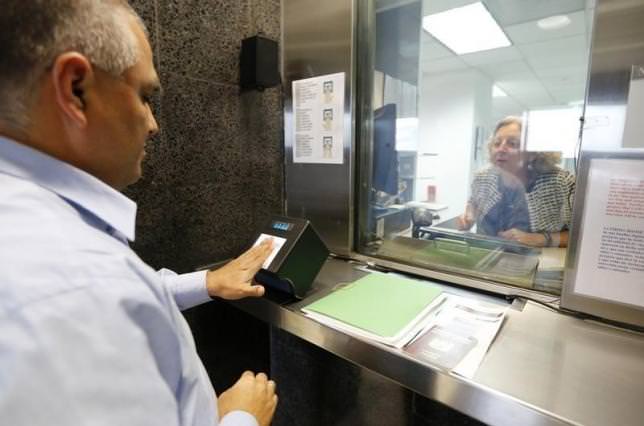 A man has his fingerprints electronically taken while taking part in visa application demonstration at consular section of US embassy in Lima Oct 3, 2014 (Reuters)
by Daily Sabah Dec 15, 2015 12:00 am
U.S. visa officials will check the visa applicant's social media accounts before allowing them to enter the country, if they see it as "necessary", Kirby said on Monday at a daily press briefing in Washington, D.C.

"If a consular officer, in doing the interview and working with – working their way through their part of it, feels like it would be valuable or necessary to look at social media or the social media presence of an individual, they can and do conduct those reviews. But it's not absolute in every case. Each one is taken individually," Kirby said.

The news comes in the wake of discovery of a Facebook post shared by one of the shooters in the San Bernardino massacre, Tashfeen Malik, before she was able to pass a background check that the U.S. government has described as "rigorous". The day after the attack, Facebook found a post on a page maintained by Malik pledging her and her husband Syed Rizwan Farook's (the other shooter) allegiance to the leader of the Daesh terrorist group Abu Bakr al-Baghdadi. The page was under an alias.

Malik was also reported to have sent at least two private messages on Facebook to a small group of Pakistani friends in 2012 and 2014, pledging her support for Daesh and saying she hoped to join the fight one day, the Los Angeles Times reported on Monday.

The history of Malik's radicalization and her apparent online discussions about terrorism activities have raised concerns about how she was able to pass a background check that the government has described as rigorous.

But of course, allowing consular officers to review social media postings is no guarantee that a would-be immigrant who has radicalized views will be discovered. Facebook and Twitter users can make their pages private and aliases are routinely employed.

John Kirby has also touched upon this issue on Monday, when he said, "It is also a fact – and I'm not speaking about this specific case – but it is also a fact that many people disguise their identities on social media. It's also a fact that many of them have in place privacy settings that would prohibit a consular officer from being able to see much of anything in terms of content on their social media platform."
Last Update: Dec 15, 2015 3:28 pm
RELATED TOPICS