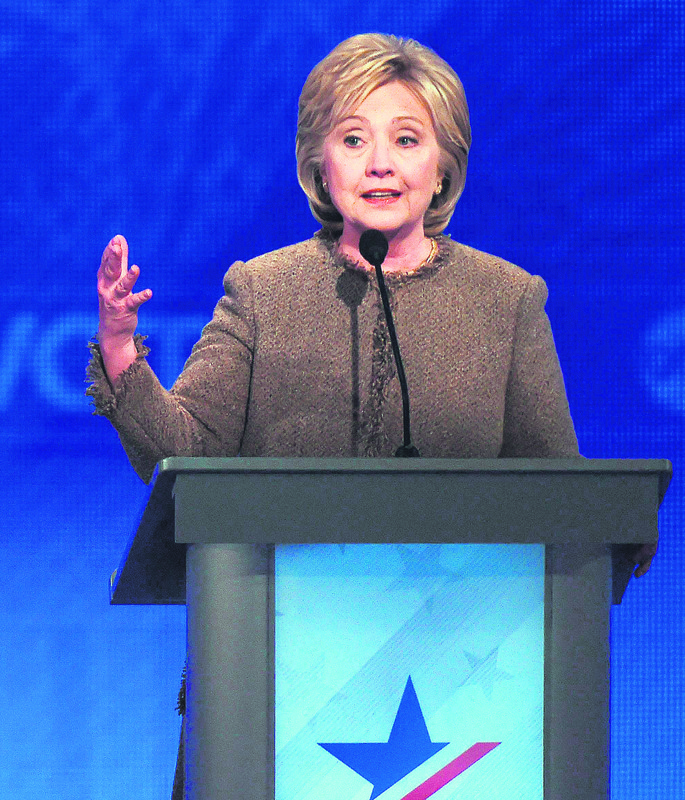 by Daily Sabah with Wires Dec 21, 2015 12:00 am
Hillary Clinton and other Democratic presidential hopefuls used Donald Trump as a political bogeyman Saturday to highlight their own calls to defeat extremists without the bigotry and bluster brandished by their top Republican rival.

Former secretary of state Clinton, Senator Bernie Sanders and Maryland ex-governor Martin O'Malley each hit on the need to boost national security, raise the minimum wage and protect rights of women, minorities and the disadvantaged as they faced off in New Hampshire. But they had heated exchanges on the economy, guns, tackling the terrorist threat as well as the role of the United States abroad.

It was their party's third debate of the primary election season – the last of 2015 and their first since the attacks in San Bernardino, California, where a radicalized married couple killed 14 people. But the candidates also took turns hitting the Trump punching bag, as they hurled outrage at the Republican's fear-mongering and recent controversial comments about immigrants, most particularly his call for a ban on Muslims entering the United States.

Americans, Clinton said, "need to make sure that the really discriminatory messages that Trump is sending around the world don't fall on receptive ears," adding that "Mr. Trump has a great capacity to use bluster and bigotry to inflame people."

In a hard-hitting comment, Clinton said, "He is becoming DAESH's best recruiter," claiming extremists are "showing videos of Donald Trump insulting Islam and Muslims in order to recruit more extremists." O'Malley also offered a harsh rebuke to the "political danger" wielded by Trump and other "unscrupulous leaders [who] try to turn us upon each other." The country will "rise to the challenge of the DAESH extremists," but only if Americans never surrender their values "to the fascist pleas of billionaires with big mouths. We are a better country than this."

All three candidates stressed working more closely with Muslim-American communities to tackle radicalism at home; in sharp contrast to the rhetoric of some Republican candidates. Returning to her focus on Trump, Clinton said, "If you're going to put together a coalition in the region to take on the threat of DAESH, you don't want to alienate the very countries you need to be part of the coalition." Clinton said US need to work with Muslim communities, "not demonize them".

While the Democrats united against Trump, Sanders clashed at length with Clinton over how to tackle extremism, opposing her call for a no-fly zone over Syria and focusing on ousting that country's President Bashar Assad. Sanders, who is more comfortable talking about economic inequality and financial abuse, topics that are the cornerstones of his campaign, was deeply skeptical. "The United States at the same time cannot successfully fight Assad and DAESH," he said. "DAESH now is the major priority. Let's get rid of Assad later."

The debate unfolded amid a minor scandal between the Clinton and Sanders campaigns over an apparent data breach when at least one Sanders staffer took advantage of a computer glitch to peek at Clinton voter information. But on stage Saturday, Sanders apologized to Clinton, saying "this is not the type of campaign that we run," and the issue quickly deflated. In a heated exchange on gun control, O'Malley accused both Clinton and Sanders of having a "flip-flopping, political approach" to the contentious issue.
RELATED TOPICS