US Muslim voters called to register for 2016 elections 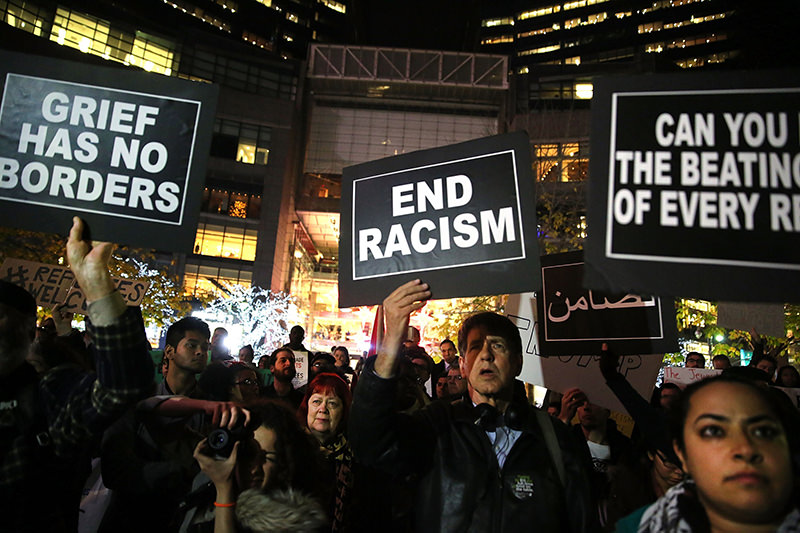 People listen to speakers at a demonstration against racism and conservative presidential candidate Trump's recent remarks concerning Muslims on Dec 10, 2015 in New York City. (AFP Photo)
by Anadolu Agency Dec 21, 2015 12:00 am
America's largest Muslim civil liberties and advocacy organization announced Monday a new initiative which aims to increase the registration of American Muslim voters for the 2016 elections to 1 million.

During the last presidential election, 91 percent of registered Muslim voters had intended to vote, according to a report from Council on American-Islamic Relations CAIR.

The announcement came after more than 100 Muslim leaders across the U.S. gathered Sunday for a summit led by the U.S. Council of Muslim organization to discuss the increase of anti-Muslim acts in America.

Major educational outreach and civic empowerment initiatives were discussed during the summit to "address the growing Islamophobia in America and to enhance the promotion of freedom and justice," said the Secretary General of the U.S. Council of Muslim organizations, or USCMO, Oussama Jammal in a press briefing.

The very first proposed initiative of the group will be to "drive to register 1 million voters prior to the 2016 elections," according to Jammal, who added that the campaign was called "One America".

"We will be doing everything possible to make our community vibrant, active, energetic, understanding that this is their country and that they have to make their choices, they have to be part of it," Jammal said.

"We will use every democratic tool [so] that your [Trump's] candidacy never succeeds," the vice president of the Islamic Circle of North America, Altaf Husain said during a speech at the briefing.

As part of the campaign, a "National Open Mosque Day" will also be launched to help increase interactions between American Muslims and citizens of other faiths and backgrounds.

"The council will seek to increase emergency preparedness for Islamic institutions and individuals to address the rising number of incidents of hate crime that are unfortunately happening nationwide," USCMO's Jammal noted.

As part of the campaign, a "National Open Mosque Day" will also be launched to help increase interactions between American Muslims and citizens of other faiths and backgrounds.

Republican front-runner in the polls, Donald Trump, called for a complete ban on Muslims entering the U.S. in the wake of the San Bernardino attack in which 14 people were killed by two suspected Daesh sympathizers. Trump's statement has been largely condemned both in the U.S. and worldwide.

Saying that Daesh killed Muslims more than any other group, Jammal stressed that the American Muslim community would combat all types of violent extremism including Daesh.

"We will not allow neither ISIL [Daesh] nor Islamophobia to define us," Jammal said. "We'll define ourselves."

Last week, a New York Times report revealed that anti-Muslim incidents across the U.S. had tripled after the deadly attacks in Paris and San Bernardino, California.

The study by the California State University research group showed that the incidents consisted of assaults on hijab-wearing students, arson and vandalism on mosques as well as shootings and death threats aimed at Islamic-owned businesses, the media outlet said.
Last Update: Dec 22, 2015 12:23 am
RELATED TOPICS