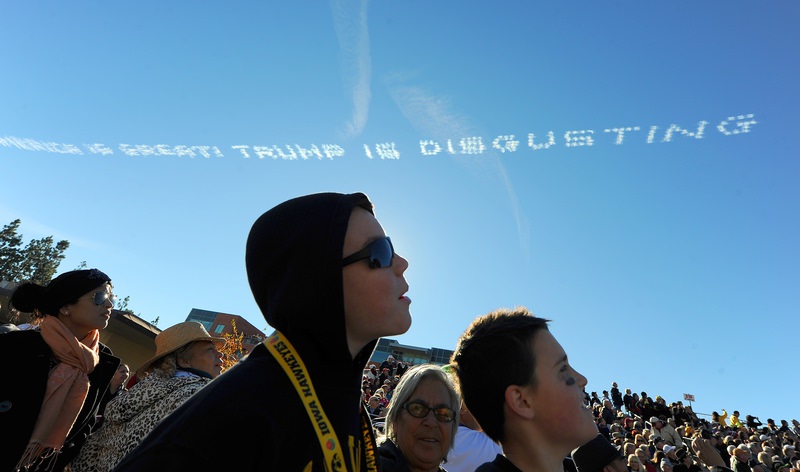 by Daily Sabah with Reuters Jan 02, 2016 12:00 am
Five planes flew over the annual Rose Parade in Pasadena, California, on Friday writing messages in the sky that included "America is great! Trump is disgusting. Anybody but Trump, US," as onlookers craned their necks for a view.

It was not immediately clear who was behind the airborne protest, targeting Republican presidential front-runner Donald Trump, which coincided with the end of the New Year's Day event that draws hundreds of thousands of visitors to Pasadena, north of Los Angeles.

A spokeswoman for the Trump campaign did not immediately respond to an email seeking comment. The controversial hopeful is seeking his party's nomination for the November presidential election.

Security on the ground for the parade had been tight, with some 700,000 spectators expected to throng the 5-1/2-mile (9-km) route of the 127th Tournament of Roses Parade, which is followed by the 102nd Rose Bowl college football game.

Spurred by last month's deadly mass shooting in nearby San Bernardino, more than two dozen federal agencies joined forces with police for the largest security operation in the history of the Rose Parade and Rose Bowl.

Many of those in the crowd looked skyward as the aircraft left their short-lived statements against a deep blue backdrop.

The planes circled for almost an hour after the parade of flower-adorned floats and marching bands finished, writing variations on a theme that included messages such as "Trump is delusional," and "Trump is a fascist dictator."

Many parade-watchers turned their cellphones to the sky to try to record and share images of the event on social media. It was not immediately clear if any of the television cameras that covered the procession live caught the protest.

Parade officials watching nearby said they did not know who was responsible for the flyover, and messages to other officials seeking details were not immediately returned.