New gun control measures are legal, could save lives: Obama 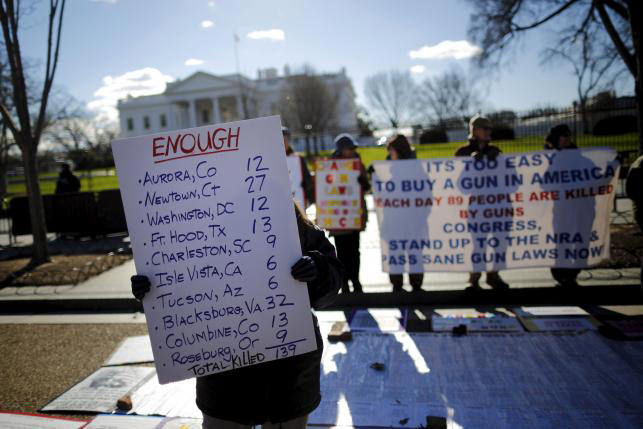 Gun control activists rally in front of the White House in Washington, January 4, 2016. (REUTERS Photo)
by reuters
Jan 04, 2016 12:00 am
President Barack Obama said on Monday his new executive actions to tighten gun rules were "well within" his legal authority and consistent with the U.S. right to bear arms, a warning to opponents who are likely to challenge them in court.

Speaking to reporters in the Oval Office, Obama said his administration would unveil the new measures Tuesday.

Obama is igniting a political firestorm by bypassing Congress with the measures, which are likely to redefine what it means to be a gun dealer and spark increased use of background checks. Republicans say Obama is misusing his powers.

"The good news is .. these are not only recommendations that are well within my legal authority and the executive branch, but they're also ones that the overwhelming majority of the American people, including gun owners, support," Obama said during a meeting with Attorney General Loretta Lynch and other advisers.

Shares in gun makers Smith & Wesson Holding Corp and Sturm Ruger & Co Inc rose against a falling stock market on Monday in anticipation of increased gun sales, as has happened before when the White House mulled weapon sales reform.

Stymied by Congress' inaction on gun control, the president asked his advisers in recent months to examine new ways he could use his executive authority to tighten gun rules unilaterally without needing congressional approval after multiple mass shootings generated outrage nationwide.

One option was a regulatory change to require more dealers to get a license to sell guns, a move that would trigger more background checks on buyers.

The White House had drafted a proposal on that issue previously but was concerned it could be challenged in court and would be hard to enforce.

Guns are a potent issue in U.S. politics. The right to bear arms is protected by the U.S. Constitution, and the National Rifle Association, the top U.S. gun rights group, is feared and respected in Washington for its ability to mobilize gun owners. Congress has not approved major gun-control legislation since the 1990s.

Obama he was confident his new measures were constitutionally sound. They would not prevent every mass shooting or violent crime, he said, but they did have the potential to save lives.

The president's planned use of executive action launches his final year with a move that Republicans say exemplifies misuse of his powers. Congress, which is controlled by Republicans, rejected Obama's proposals for legislation to tighten gun rules in 2013.

"While we don't yet know the details of the plan, the president is at minimum subverting the legislative branch, and potentially overturning its will," Republican Speaker of the House of Representatives Paul Ryan said in a statement.

"This is a dangerous level of executive overreach, and the country will not stand for it."

In 2008, the U.S. Supreme Court held that the Second Amendment of the U.S. Constitution protects the rights of individual Americans to keep and bear arms. But the court also recognized that laws imposing conditions on commercial guns sale can be consistent with the Second Amendment.
Last Update: Jan 05, 2016 12:48 am