A history of deadliest mass shootings in the US 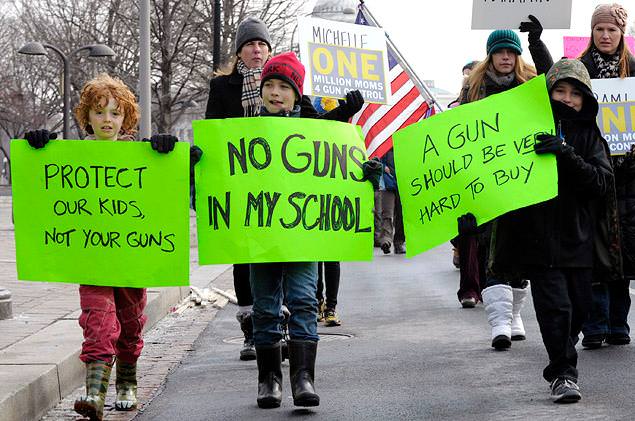 People walk from the U.S. Capitol to the Washington Monument in Washington, Saturday, Jan. 26, 2013, during a march on Washington for gun control. (AP Photo)
by reuters Jan 05, 2016 12:00 am
U.S. President Barack Obama, outlining steps to tighten rules on guns on Tuesday, tearfully recalled a mass shooting at a Connecticut elementary school in 2012 in which 20 children were murdered.

The Newtown, Connecticut, killings, were among the more recent of a series of mass shootings dating back to at least the mid-1990s. Below are some of the worst such incidents in recent years, ranked by the number of dead, including the gunman:

Virginia Tech April 16, 2007 - A gunman slaughters 32 people and kills himself at Virginia Tech, a university in Blacksburg, Virginia.

Sandy Hook Dec. 14, 2012 - A gunman shoots his mother to death, then kills 20 children, six adults and himself at Sandy Hook Elementary School in Newtown, Connecticut.

San Bernardino Dec. 2, 2015 - A husband and wife kill 14 people at a workplace holiday party in San Bernardino in Southern California before being killed in a shootout with police.

Columbine April 20, 1999 - Two heavily armed teenagers go on a rampage at Columbine High School in Littleton, Colorado, shooting 12 students and a teacher to death and wounding more than 20 others before taking their own lives.

Immigration center April 3, 2009 - A Vietnamese immigrant opens fire at an immigrant services center in Binghamton, New York, killing 13 people and wounding four. He then kills himself.

Fort Hood Nov. 5, 2009 - A gunman opens fire at Fort Hood, a U.S. Army base in Texas, killing 13 people. The gunman, an Army major and psychiatrist, was sentenced to death for the rampage.

Colorado movie theater July 20, 2012 - A masked gunman kills 12 people and wounds 70 when he opens fire on moviegoers at a midnight premiere of the Batman film "The Dark Knight Rises" in Aurora, a Denver suburb. A former graduate student is sentenced to life in prison for the rampage.

Washington, D.C., snipers October 2002 - Two men ambush 13 people, killing 10 of them, in a string of sniper-style shootings that terrorize the Washington area.

Waco bikers May 17, 2015 - Rival motorcycle gangs kill nine at a restaurant in Waco, Texas. More than 170 people are arrested.

Grandfather kills family Sept. 18, 2014 - Man kills his daughter and six grandchildren in Bell, Florida, and then kills himself.

Sikh temple Aug. 5, 2012 - A white supremacist walks into a Sikh temple in Oak Creek, Wisconsin, killing six worshippers. The gunman kills himself after being shot by a police officer.

Florida apartment July 26, 2013 - A man goes on a shooting spree at an apartment complex in Hialeah, Florida, killing six people. The shooter is killed by police.

Amish school Oct. 2, 2006 - A gunman kills five girls in a one-room Amish schoolhouse in Nickel Mines, Pennsylvania, before killing himself.

Television journalists Aug. 26, 2015 - A reporter and a cameraman are fatally ambushed by a former employee of their Roanoke, Virginia, television station while they are interviewing a woman on live TV. The woman is wounded. The gunman later kills himself as police pursue him on a highway hours after the shooting.
Last Update: Jan 05, 2016 11:12 pm
RELATED TOPICS