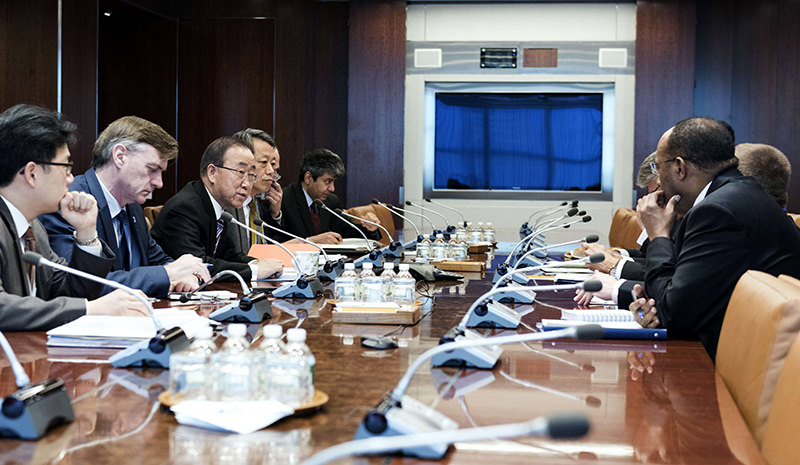 United Nations handout photo, UN Secretary-General Ban Ki-moon (3rd-L) holds a emergency meeting with senior advisors to discuss the latest developments in North Korea (AFP Photo)
by Compiled from Wire Services Jan 06, 2016 12:00 am
The top Democrat on the U.S. Senate Foreign Relations Committee on Wednesday said he will pursue legislation to impose more sanctions on North Korea after it reported conducting a nuclear test, adding the United States and other nations "must respond resolutely," while the United Nations has also announced they will discuss further action on the move.

Meanwhile, the UN Security Council began an emergency meeting on Wednesday to agree on a response to North Korea's nuclear test.

The closed meeting was requested by the United States and Japan after Pyongyang announced it had carried out a "successful" hydrogen bomb test.

The UN Security Council will consider "further action" against North Korea after the country's latest nuclear test, said Motohide Yoshikawa, Japanese ambassador to the United Nations and a member of the council.

"There are measures that we have agreed in that past that, if there is another nuclear test, there should be further action by the Security Council," Yoshikawa said.

The international community needs to respond to the test "with the most robust language that we can find," he says before an emergency meeting of the council.