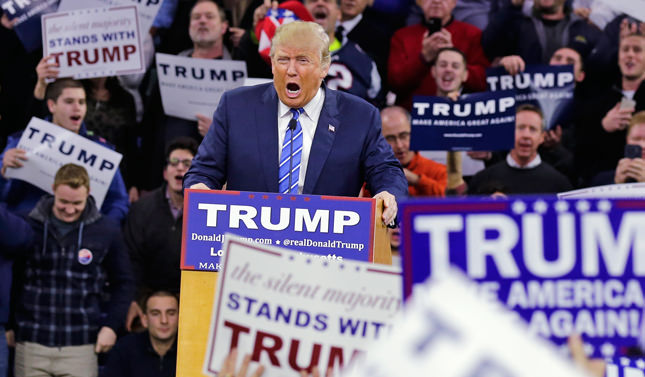 by French Press Agency - AFP Jan 07, 2016 12:00 am
Donald Trump will scrap $1 billion of planned investments in Britain if he is banned from entering the country, a spokesman for the U.S. politician's business empire said on Wednesday.

British lawmakers are expected to debate whether the Republican presidential candidate should be barred from Britain for an alleged "hate speech", a move the Trump Organization said would set a "dangerous precedent".

The organisation said the U.S. tycoon had planned to invest a total of £700 million pounds (950 million euros, $1 billion) in two golf courses he owns in Scotland.

"Any action to restrict travel would force The Trump Organization to immediately end these and all future investments we are currently contemplating in the United Kingdom," spokesman George Sorial said in a statement.

"Westminster would create a dangerous precedent and send a terrible message to the world that the United Kingdom opposes free speech and has no interest in attracting inward investment."

Parliament is due to debate whether Trump should be banned on January 18, after an online petition calling for him to be barred gathered more than 570,000 signatures.

Lawmakers are obliged to consider for debate any official petition that reaches 100,000 signatures, but no decision is taken at the end of the session.

The petition accused Trump of hate speech after his call last month for Muslims to be temporarily denied entry to the United States, following a mass shooting in California by a Muslim couple said to have been radicalised.

He has also in recent months labelled Mexican immigrants rapists and mocked a disabled reporter by mimicking him.

Prime Minister David Cameron has condemned Trump's remarks on Muslims as "divisive, stupid and wrong" but does not support banning him.
Along with the petition to ban Trump, parliament is at the same time expected to debate an opposing petition calling for him not to be barred, which garnered almost 41,000 signatures.

The petition said such a move would damage close U.S.-British ties, a sentiment echoed by the Trump Organization.

"This would also alienate the many millions of United States citizens who wholeheartedly support Mr. Trump and have made him the frontrunner by far in the 2016 Presidential Election."

Scotland, where Trump's mother came from and where he has two golf courses, has distanced itself from the magnate after his comments on Muslims.

Scottish First Minister Nicola Sturgeon revoked Trump's membership of the GlobalScot business network and said he was no longer fit to be a business ambassador for Scotland, and Robert Gordon University in Aberdeen revoked an honorary doctorate it gave Trump in 2010.
Last Update: Jan 07, 2016 12:12 pm
RELATED TOPICS