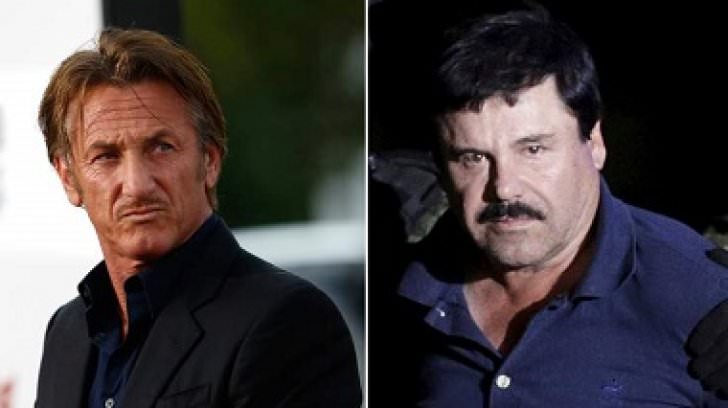 "That is correct, of course, it's to determine responsibilities," the official said on condition of anonymity, refusing to provide more details after Rolling Stone on Saturday published an October interview between Guzman, Penn and Castillo before his recapture this week.

A clandestine meeting between US actor Sean Penn and Joaquin "El Chapo" Guzman in the Mexican jungle helped lead to the drug kingpin's capture this week, a Mexican official said.

The US rock magazine Rolling Stone posted online on Saturday an interview between Penn and Guzman as well as an October 2 picture showing the Oscar-winning actor shaking hands with the mustachioed Sinaloa drug cartel leader, who is wearing a blue shirt.

Penn writes that the 58-year-old Guzman gave him a "compadre" hug when they met at a Mexican jungle clearing and had a seven-hour sitdown followed by phone and video interviews.

"I supply more heroin, methamphetamine, cocaine and marijuana than anybody else in the world," Guzman told Penn in a stunning admission of his criminal enterprise over sips of tequila.

"I have a fleet of submarines, airplanes, trucks and boats," Guzman said in the meeting, which Mexican actress Kate del Castillo helped to arrange.

Despite Penn's cloak-and-dagger efforts to keep the gathering secret, a Mexican federal official told AFP that authorities "had knowledge of this meeting" and that it helped lead to Friday's recapture of the world's most wanted man in his northwestern home state of Sinaloa.

The official declined to say whether Penn and del Castillo are being investigated over the clandestine meeting.

Mexican Attorney General Arely Gomez said on Friday that Guzman had met with unnamed actors and producers in the hope of making a biopic about himself, which helped locate him. She said it was part of a "new line of investigation," without elaborating.

Rolling Stone also published a video showing Guzman without a mustache, talking about why he decided to go into drug trafficking after the age of 15 because there were "no job opportunities."

"Unfortunately, where I grew up, there was and there is no other way to survive," Guzman said.

Asked if he feels responsible for the high level of addictions in the world, he said: "It's false. The day that I don't exist, it won't reduce drug trafficking."

In a text message exchange days after their meeting, Guzman discusses a marine helicopter raid that almost captured him on October 6. He downplayed injuries to his face and leg reported by the authorities, saying: "Not like they said. I only hurt my leg a little bit."

Authorities said the marines did not shoot Guzman during the raid because he was accompanied by two women and a girl, but that he hurt himself in a fall.

The Rolling Stone interview emerged after Mexican prosecutors announced that they would seek Guzman's extradition to the United States, a reversal from President Enrique Pena Nieto's refusal to send him across the border.

The attorney general's office said it received two US extradition requests last year on a slew of charges, including drug trafficking and murder, and that it later obtained arrest warrants to ship him across the border.

"With Guzman Loera's recapture, the respective extradition proceedings will have to start," the office said in a statement.

It did not indicate when the hearings would start, and noted that Guzman's lawyers could appeal.

One of Guzman's attorneys, Juan Pablo Badillo, vowed to take the case up to the Supreme Court if necessary.

"He shouldn't be extradited because Mexico has a fair Constitution," Badillo told reporters outside the Altiplano prison near Mexico City, where Guzman was sent following his arrest.

It was from that prison that Guzman escaped on July 11, sneaking into a hole in his cell's shower that led to a 1.5-kilometer (one-mile) tunnel outside the prison.

A Mexican federal official defended the decision to send Guzman back to Altiplano, saying measures were taken to improve security, including the installation of metal rods under the floor of prison cells.

The world's most wanted drug baron was arrested after a deadly military raid on a house early Friday in Los Mochis, a coastal city in his native northwestern state of Sinaloa.

Five suspects died and one marine was wounded in the raid. Six people were detained in the operation.

Guzman and his security chief fled through the city's drainage system.

The wanted men came out of a manhole and stole a car, but they were captured on a road and taken to a motel, where Guzman was pictured seated on a bed wearing a dirty sleeveless shirt -- an ignominious end for a kingpin whose billion dollar drug business reaches as far as Asia and Europe.

In the Rolling Stone video interview, Guzman is asked about the belief that Mexican authorities want to kill him instead of taking him alive.
He responds: "No, I think that if they find me they will arrest me. Of course."
Last Update: Jan 10, 2016 5:12 pm