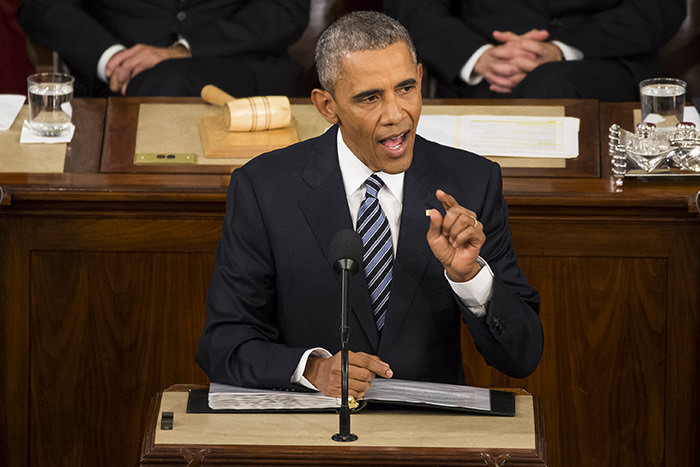 by Compiled from Wire Services Jan 13, 2016 12:00 am
U.S. President Barack Obama didn't mention any presidential candidates during his final State of the Union address on Tuesday, but Donald Trump and his fiery rhetoric against Muslims and immigrants were clearly on his mind.

In remarks to Congress, Obama sought to lay out his vision for the future regardless of who is elected the next president, but it's clear he would like his vision to be carried on by a successor from his center-left Democratic Party.

A significant section of the president's hour-long speech was reserved for criticism of rhetoric that betrayed American values - widely interpreted as an attack on Republican presidential hopeful Donald Trump, although Obama did not mention the real estate billionaire by name. Trump, the Republican front-runner, entered the election contest by denigrating Mexican immigrants and vowing to build a wall on the southern border. He called for banning the entry of all Muslims into the United States after a terrorist attack in California last month.

Obama denounced such rhetoric as diminishing the U.S. on the world stage and betraying the universal values on which the country was founded. "When politicians insult Muslims ... that doesn't make us safer," he said. "That's not telling it like it is. It's just wrong." Addressing lawmakers, Cabinet members and Supreme Court justices, Obama said tolerance was "what makes America great" and attacks on Muslims "betrays who we are as a country."

Obama also said: "We need to reject any politics that targets people because of race or religion. This isn't a matter of political correctness."

Much of Trump's support comes from outside traditional Republican circles. The party establishment has expressed concern that he could damage the party, while also seeking to prevent him from staging a third-party bid that could scuttle another Republican candidate.

South Carolina Governor Nikki Haley, who was tapped by the party to deliver the Republican response to Obama, took her own jab at Trump. "During anxious times, it can be tempting to follow the siren call of the angriest voices. We must resist that temptation," said Haley, the daughter of Indian immigrants.

"No one who is willing to work hard, abide by our laws, and love our traditions should ever feel unwelcome in this country." For his part, Trump provided very little commentary on Obama's speech to Congress, but declared on Twitter: "The #SOTU speech is really boring, slow, lethargic - very hard to watch!"

Cruz said Obama "continues to be in denial of reality," knocking the president's handling of the economy, the fight against DAESH and his partisan rhetoric. "He lectures us on civility yet has been one of the most divisive presidents in American history," Cruz said.

Rubio and Senator Bernie Sanders, a Democratic presidential candidate, were the only candidates in the audience as other lawmakers in the presidential field remained on the campaign trail. Sanders and Democratic frontrunner Hillary Rodham Clinton praised Obama's remarks.

Clinton, who as Obama's first secretary of state is the candidate most closely associated with his legacy, declared on her Twitter account: "Seven years of progress. We need to build on it - not go backwards."

Despite his serious words on political rhetoric, Obama opened with a joke about the campaign that will soon pick his successor. "I know some of you are antsy to get back to Iowa," where the first caucus will be in just under three weeks, he joked. "I've been there. I'll be shaking hands afterward if you want some tips." The first in a series of intra-party contests to determine party nominees will be held in the central state of Iowa on Feb. 1, followed by New Hampshire on Feb. 9. The Republican and Democratic nominees will face off in the presidential election on Nov. 8.
Last Update: Jan 13, 2016 3:27 pm
RELATED TOPICS