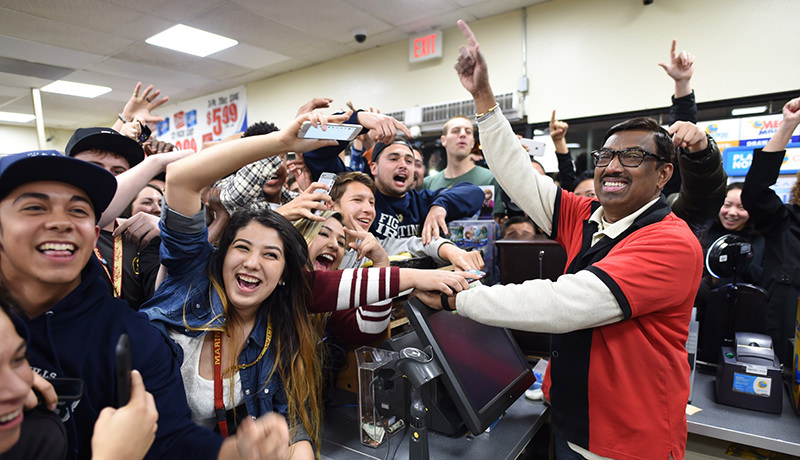 7-Eleven store clerk M. Faroqui celebrates with customers after learning the store sold the only winning Powerball ticket on Wednesday, Jan. 13, 2016 in Chino Hills, Calif (AP Photo)
by Compiled from Wire Services Jan 14, 2016 12:00 am
Several people shared a bonanza of $1.6 billion (1.47 billion euros) Wednesday in the US Powerball lottery, officials and reports said, after millions tuned in to see the fate of the world-record jackpot live on TV.

One winning ticket was sold at a convenience story in California, Powerball USA said on its Twitter feed.

Lottery fever had gripped the United States leading up to Wednesday's draw.

People lined up to buy 2-dollar tickets at newsstands, petrol stations and convenience stores located in the 44 states that participate in the lottery, along with Washington, DC.

Some people were so eager to wager they crossed state lines and waited in line for hours to buy a ticket.

The 1.5-billion-dollar jackpot in the Powerball game is more than double the previous record US lottery jackpot of 656 million dollars. The jackpot swelled to the whopping sum after weeks with no players matching all six numbers.

If there were only a single winner who opts for a lump sum payment, they would receive a payout of approximately 930 million dollars before taxes.

Powerball drawings are every Wednesday and Saturday night. Five white balls are drawn out of a drum with 69 balls, with an additional red ball drawn from a drum with 26 red balls.

A winning ticket is one matching all five white balls in any order and the red Powerball.

Ticket holders face odds of 292 million to one, according to the technology magazine Wired. That is about the same as the odds of being hit by an asteroid.
Last Update: Jan 20, 2016 5:18 pm
RELATED TOPICS