More than 400,000 poultry to be killed to cope with US bird flu outbreak 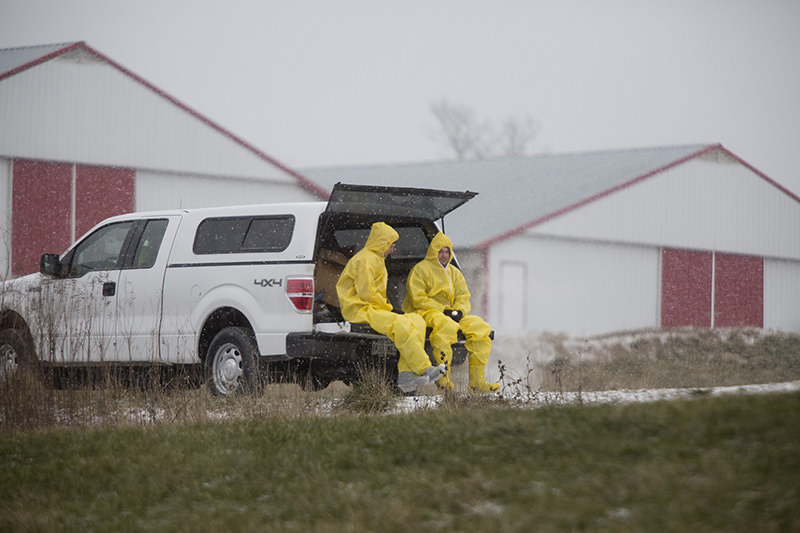 by Associated Press Jan 19, 2016 12:00 am
Animal health officials investigating a bird flu outbreak in southwest Indiana have ordered 156,000 chickens at one of 10 affected commercial poultry farms to be euthanized, raising the total number of birds to be killed above 400,000.

The egg-laying chickens were housed at one of the 10 commercial farms where turkeys had been infected with the H7N8 virus and were at a high risk of contracting it themselves, Indiana State Board of Animal Health spokeswoman Denise Derrer said Tuesday.

The H7N8 strain is different than the H5N2 virus that led to the deaths of 48 million birds last summer.

Agriculture Secretary Tom Vilsack said the Indiana outbreak has been a test of whether officials are ready for future bird flu outbreaks and shows the need to stay on guard year-round.

"It is a wake-up call. It was a good opportunity to see if we're responding the way we should and I think we did," he said Tuesday at renewable fuels summit in Iowa.

All of the turkey farms where the virus has been found are in Dubois County, a county about 70 miles west of Louisville, Kentucky, that is Indiana's top poultry producer.

The first infection was confirmed last week at a 60,000-turkey farm with connections to major Indiana-based producer Farbest Farms, which has contract growers in Indiana, Illinois and Kentucky. But the other nine farms contract with several companies, Derrer said, and officials are investigating whether the virus might have been spread by workers with those companies traveling between farms or whether it was wild birds, wind patterns or other methods.

All of Stephen Sander's 23,000 turkeys that he was raising on contract for Perdue Farms had to be killed; they're piled up and composting in three barns. The 57-year-old who's been raising turkeys for a quarter-century told The Associated Press on Tuesday that losing so many birds has been upsetting but outbreaks are one of the risks livestock farmers take.

"Grain farmers can have a drought, and it hurts them," the owner of Tip Top Turkey Farm said. "It's the same for any business something could happen and you have to go with the flow. But it still hurts."

State and federal workers, low-level prison inmates and workers at the farms have been euthanizing more than 245,000 turkeys plus the chickens to prevent the virus' spread. They've finished the job at seven of the 10 affected farms, Derrer said, and are racing to finish at the three others before a winter storm that could bring several inches of snow arrives overnight.

"The weather's going to get worse overnight, with the wet snow coming in, so they're putting the pedal to metal," she said.

Cold weather is still posing problems for crews using a suffocating foam to kill the birds, she said, adding that even though water was freezing in hoses, most of the birds have been killed using that foam. Carbon dioxide gas and a device that delivers a fatal head injury are also being used.

No additional cases of the H7N8 strain have been found in the 6-plus-mile control zone around the first farm, she said Tuesday. Indiana's state veterinarian has also created a precautionary "surveillance zone" that extends another six miles beyond the control area and officials are testing farms and backyard flocks, too.

"We're trying to be really aggressive on testing in that extended area to make sure there's no virus still floating around out there that's going to pop up later. We're trying to do the best we can," she said.

The state Department of Health and local health officials are monitoring everyone who's had contact with the birds for 10 days to make sure they don't develop flu symptoms; the USDA has said no human infections from the viral strain have been detected.
Last Update: Jan 20, 2016 4:53 pm
RELATED TOPICS