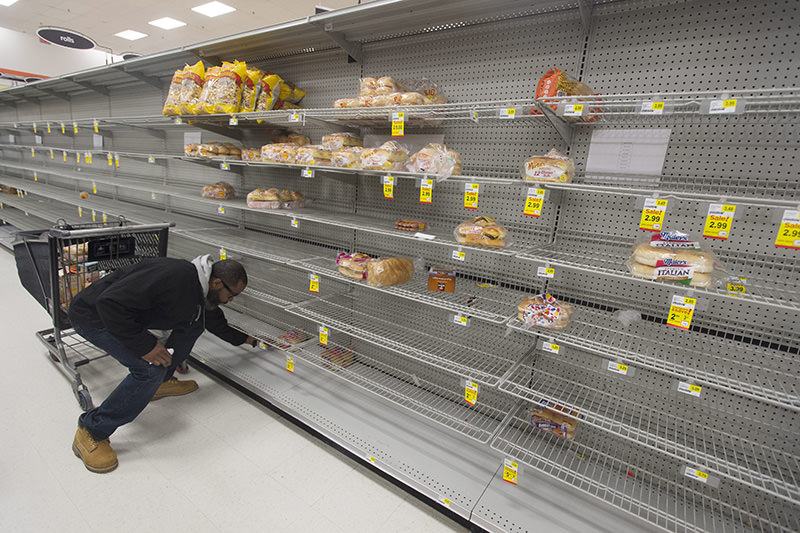 by Associated Press Jan 22, 2016 12:00 am
A massive blizzard swirled toward the eastern United States on Friday, one that the National Weather Service said could rank near the top 10 to ever hit the region. With more than 2 feet (61 centimeters) of snow predicted for Washington alone, schools were closed, flights were canceled and a state of emergency was declared across a vast area.

NWS meteorologist Paul Kocin compared the storm to "Snowmageddon," the first of two storms that "wiped out" Washington in 2010 and dumped up to 30 inches (76 centimeters) of snow, but said the weekend timing and the days of warning could help limit deaths and damage.

"It does have the potential to be an extremely dangerous storm that can affect more than 50 million people," Louis Uccellini, director of the weather service, said at its Weather Prediction Center in College Park, Maryland.

He said all the elements have come together to create a blizzard with brutally high winds, dangerous inland flooding, white-out conditions and even the possibility of thunder snow, when lightning strikes through a snowstorm. The snowfall, expected to continue from late Friday into Sunday, could easily cause more than $1 billion in damage and paralyze the eastern third of the nation, Uccellini said.

A state of emergency was declared in Tennessee, North Carolina, Virginia, Maryland, Pennsylvania, the District of Columbia and parts of other states, and road crews were out in force. Blizzard warnings or watches were in effect along the storm's path, from Arkansas through Tennessee and Kentucky to the mid-Atlantic states and as far north as New York.

Schools and government offices were closed, thousands of flights were canceled and food and supplies flew off store shelves as millions of people stocked up. College basketball games and concerts in the region were postponed.

Washington looks like the bull's-eye of the blizzard, and New York City is just inside the slow-moving storm's sharp northern edge, which means it is likely to see heavy accumulations, he said.

The capital's subway system said it will shut down entirely late Friday night and remain closed through Sunday for the sake of employee and rider safety. Underground stations usually stay open during major snowstorms.

White House spokesman Josh Earnest said Obama would hunker down at the White House, and is confident that local officials will get it right.

Uccellini said residents should expect high winds, a storm surge and inland flooding from Delaware to New York. Other severe but non-snowy weather is likely from Texas to Florida as the storm system chugs across the Gulf Coast, gaining moisture.

On Thursday, icy conditions caused accidents that killed two drivers in North Carolina and one in Tennessee. A truck with a snowplow killed a pedestrian in Maryland.

Train service could be disrupted as well, by frozen switches, the loss of third-rail electric power or trees falling on overhead wires. About 1,000 track workers will be deployed to keep New York City's subway system moving and 79 trains will have "scraper shoes" to reduce the icing on the rails.

All major airlines have issued waivers for travel over the weekend, allowing passengers to rebook onto earlier or later flights to avoid the storms. The flight tracking site FlightAware estimates airlines will cancel at least 2,000 flights Friday and another 3,000 Saturday. By Sunday afternoon, however, the airlines hope to be back to full schedule.

At a supermarket in Baltimore, Sharon Brewington stocked her cart with snacks, bread, milk and cold cuts, remembering that in the massive snowstorm of 2010, she and her daughter were stuck at home with nothing but noodles and water.

"I'm not going to make that mistake again," she said.

To the north, the usually snowy states of New England, looked on with snow envy. Northern New England may see nary a flake from the snowstorm that's going to clobber the Middle Atlantic and that's a major bummer for snow lovers. New England snowmobile and cross-country ski trails have exposed stumps and rocks and open water remains on normally frozen lakes and ponds.