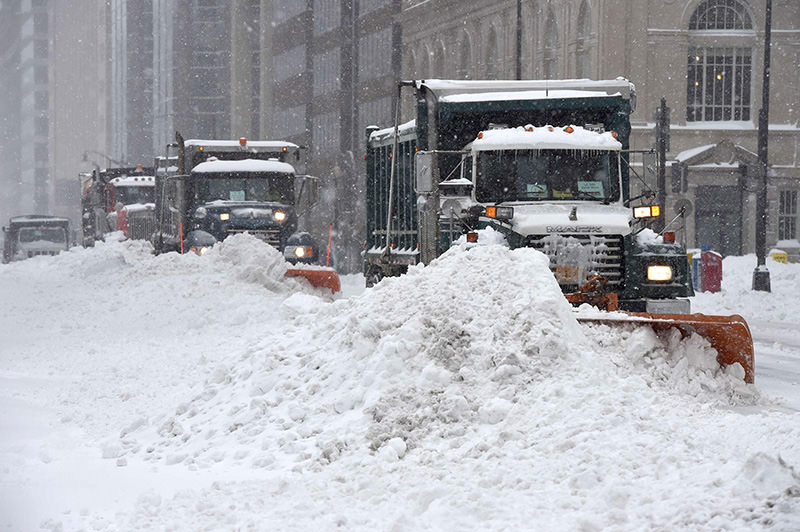 by Associated Press Jan 23, 2016 12:00 am
A blizzard with hurricane-force winds brought much of the U.S. East Coast to a standstill Saturday, dumping as much as 3 feet (90 centimeters) of snow, stranding tens of thousands of travelers and shutting down Washington and New York City.

After days of weather warnings, most of the 80 million people in the storm's path heeded requests to stay home and off the roads, which were largely deserted. But more was yet to come, with dangerous conditions expected to persist until early Sunday.

In addition to snow and treacherous winds, the National Weather Service predicted up to half an inch (1.25 centimeters) of ice for the Carolinas and potentially serious coastal flooding for the mid-Atlantic region.

"This is going to be one of those generational events, where your parents talk about how bad it was," Ryan Maue, a meteorologist for WeatherBell Analytics, said from Tallahassee, Florida, which also got some flakes.

At least 12 deaths were blamed on the weather, most from traffic accidents.

The ice and snow canceled more than 4,400 flights on Saturday, bringing the weekend total to 6,300 flights. Airlines hoped to be back in business by Sunday afternoon.

The system was mammoth, dropping snow from the Gulf Coast to the northeasteren New England states. By early afternoon, areas near Washington had surpassed 30 inches (75 centimeters), according to the weather service's running totals. The heaviest unofficial report was in a rural area of West Virginia, not far from Harper's Ferry, with 40 inches (100 centimeters).

The ice and snow made travel treacherous, causing thousands of accidents and canceling nearly 4,300 flights on Saturday, the bulk of them at airports in the New York City and Washington metro areas. Another 1,235 flights were canceled for Sunday, according to flight tracking service Flight Aware. Airlines hoped to be back in business by Sunday afternoon.

As the storm picked up, forecasters increased their snow predictions for New York and points north. The new estimates were for heavy snow nearly all the way to Boston, forecaster Patrick Burke said from at the weather service's Weather Prediction Center in College Park, Maryland.

Eighteen to 24 inches (45 to 60 centimeters) were predicted for Washington, Baltimore and Philadelphia; and 15 to 20 inches (37.5 to 50 centimeters) for New York, Burke said.

"This is kind of a top 10 snowstorm," said weather service winter storm expert Paul Kocin, who co-wrote a two-volume textbook on blizzards. And for New York and Washington this looks like top 5, he said. "It's a big one."

In Washington, monuments that would normally be busy with tourists stood vacant. In the morning, the steps of the Lincoln Memorial had not been cleared off and looked almost like a ski slope. At the Korean War Veterans Memorial, statues of soldiers were coated with snow, as was the Martin Luther King Jr. Memorial.

All mass transit in the capital was to be shut down through Sunday.

By midday, New York Gov. Andrew Cuomo imposed a travel ban in New York City, ordering all nonemergency vehicles off the roads. Mayor Bill de Blasio urged Broadway theaters and restaurants to close. The city's commuter rails and above-ground segments of the subway were to shut down too, along with buses.

Cab driver Mian Ayyub said he tried to pick up fares Saturday morning but gave up after getting stuck four times in two hours. Police and passers-by helped get him free.

"I've been driving a cab 28 years, but this looks like the worst." He parked in the East Village and went home.

A miles-long backup of vehicles on the Pennsylvania Turnpike in western Pennsylvania included a church group from Indiana.

Father Shaun Whittington said he and his 96 parishioners, mostly teenagers, were on their way home Friday evening from the March for Life anti-abortion protest in Washington when the turnpike turned into a snowy parking lot. Plows finally arrived at midday Saturday.

Hundreds of drivers were also stranded overnight in Kentucky on a long stretch of Interstate 75 south of Lexington because of a string of crashes and blowing snow. Crews passed out snacks, fuel and water and tried to move cars one by one.

The snow alone would have been enough to bring the East Coast to a halt. But it was whipped into a maelstrom by winds that reached 75 mph (120 kph) at Dewey Beach, Delaware, and Langley Air Force Base, Virginia, according to the weather service.

From Virginia to New York, sustained winds topped 30 mph (48 kph) and gusted to around 50 mph (80 kph), Burke said. The wind was so strong that scientists reported trouble measuring the snow because it sometimes seemed to blow sideways.

And if that weren't enough, the storm also had bursts of thunder and lightning. Forecasters saw lightning out the window of the Weather Prediction Center, where meteorologists were camped out.

Stranded travelers included Defense Secretary Ash Carter, whose high-tech aircraft, known as the Doomsday Plane, couldn't land at Andrews Air Force Base in Maryland after returning from Europe. Carter was rerouted to Tampa, Florida, where he planned to wait for better weather.

Hank Thiess, general manager at Wintergreen ski resort in central Virginia, said he expected to have "just a terrific" second half of the season. He was expecting 40 inches (50 centimeters) of dry, powdery snow.