The heat is on in New Hampshire primary as Trump, Sanders look to emerge with wins 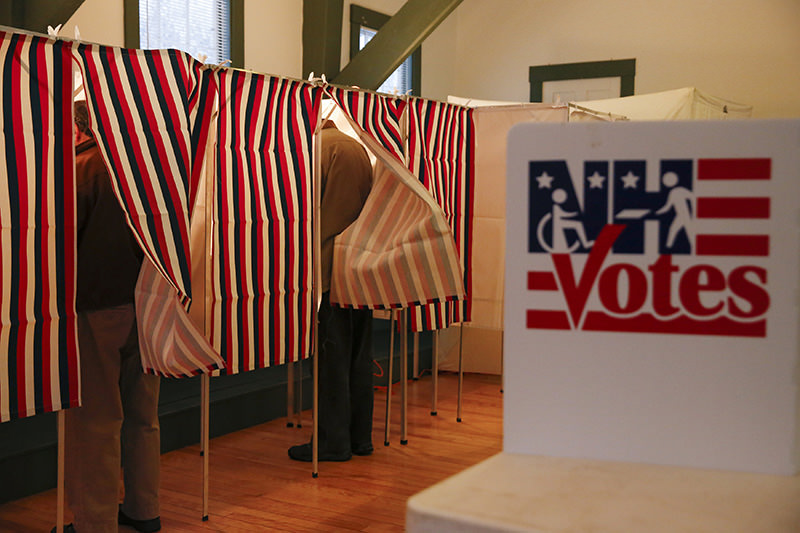 People vote at a polling place at the Canterbury Town Hall polling station in Canterbury, New Hampshire February 9, 2016 (Reuters Photo)
by Associated Press Feb 09, 2016 12:00 am
Donald Trump and Bernie Sanders hope to emerge from New Hampshire's primary Tuesday with their first wins of the 2016 presidential campaign, victories that would lend needed credibility to the unexpected contenders' pursuit of their parties' nomination.

Trump leads the Republican field in the country's first primary, while Florida Sen. Marco Rubio tries to establish himself as the chief rival to Trump and Texas Sen. Ted Cruz.

In the two-person race for the Democratic nomination, Vermont Sen. Sanders has an advantage over Hillary Clinton in New Hampshire after his narrow second-place finish in Iowa last week. He must win to have a chance of staying competitive with the former secretary of state and first lady as the race moves to more diverse states.

Clinton on Tuesday vowed to "keep working until the last vote is cast and counted."

The New Hampshire primary gives momentum to the winners heading into the next contests in South Carolina and Nevada as candidates race to pick up delegates for their parties' nominating conventions. Those who fare poorly could see donations dry up and face pressure to withdraw from the race.

While critics also argue that New Hampshire is too small and too white to play such a major role in picking presidents, its defenders say the country is well-served because the primary requires close contact with voters, not just name-recognition or advertising cash.

The first ballots were cast early Tuesday in the tiny town of Dixville. Sanders won over all four Democratic voters in the town, while Ohio Gov. John Kasich sneaked past Trump, 3-2, among Republicans.

The enthusiasm behind Trump, a real estate mogul who has never held political office or run in an election, and Sanders, an avowed democratic socialist, underscore the public's impatience with the current political system.

After finishing behind Cruz in Iowa, Trump has spent the past week stepping up more traditional campaign activities.

When an audience member at a rally Monday night shouted out an insult directed at Cruz, a vulgar term for "coward," Trump repeated the term and jokingly reprimanded the woman.

Cruz later said Trump has no choice but to engage in profanity because the billionaire businessman can't defend his record.

"Part of the reason that Donald engages in insults is because he can't discuss the substance," Cruz told reporters.

If Rubio and the governors finish in a pack Tuesday, it's likely to frustrate Republican Party elites who are eager to have a more mainstream candidate to challenge Trump and Cruz. Some party leaders believe both Trump and Cruz are unelectable in the general election, especially if Clinton is the Democratic nominee.
Last Update: Feb 10, 2016 7:05 am
RELATED TOPICS