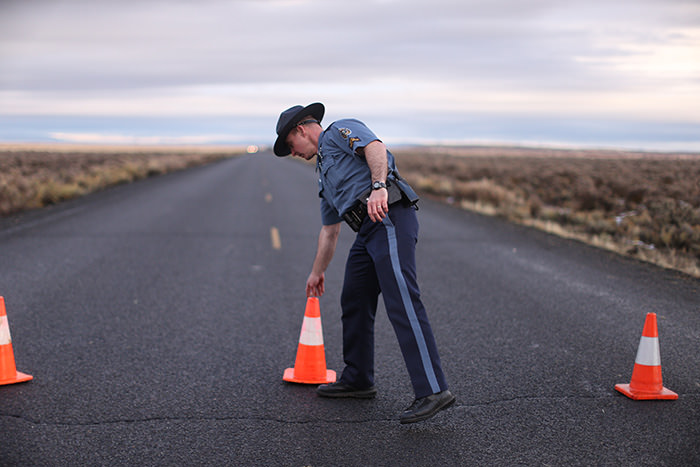 An officer with the Oregon State Police moves a cone to establish a roadblock along one of the routes to the Malheur National Wildlife Refuge in Harney County, Ore (AP Photo)
by Feb 11, 2016 12:00 am
The FBI surrounded the last protesters holed up at a federal wildlife refuge in Oregon amid reports they will surrender on Thursday, suggesting the weeks-long armed siege is approaching a climax.

The remaining four said they will peacefully turn themselves in, local media including The Oregonian newspaper reported, after negotiations between the occupiers and FBI agents Wednesday on what was the 40th day of the tense standoff.

The siege at the Malheur National Wildlife Refuge began on January 2 when protest leader Ammon Bundy and 30 armed followers, most of them from other US states, took over the site to demonstrate against federal land policies.

FBI agents were deployed at barricades "immediately ahead of and behind the area where the occupiers are camping," the FBI said in a statement, as it closed in on the dogged last protesters.

"It has never been the FBI's desire to engage these armed occupiers in any way other than through dialogue, and to that end, the FBI has negotiated with patience and restraint in an effort to resolve the situation peacefully," said Greg Bretzing, head of the FBI's Portland office.

"However, we reached a point where it became necessary to take action in a way that best ensured the safety of those on the refuge, the law enforcement officers who are on scene, and the people of Harney County who live and work in this area."

The FBI said that it moved in after one of the remaining occupiers drove an all-terrain vehicle beyond the makeshift barricades set up by the protesters.

FBI agents tried to approach the driver but he sped back to the refuge compound.

The Oregonian said that the FBI told the occupiers that they would not escalate the situation in what was left of Wednesday, but were not leaving the scene either.

Meanwhile, Nevada rancher Cliven Bundy, father of the arrested Ammon Bundy, was himself arrested in Portland as he stepped off a flight from Las Vegas.

He was reportedly on his way to the protest site, in what increasingly appeared to be the denouement to the standoff.

Ammon Bundy, who was among a dozen people arrested late last month, has repeatedly called for the last four holdouts to call off the movement and leave peacefully.

Nevada Assemblywoman Michele Fiore spoke to those left in the compound and was en route to the wildlife refuge in an effort to ensure a peaceful conclusion.

"I need you guys alive," she told them in a phone call which was live-streamed on the Internet, appealing for them to remain calm and reminding them that the call was being played to a live audience.

Among those refusing to surrender is David Fry, who had vowed to stand his ground.

The band of original occupiers included Jon Ritzheimer, an Arizona man who gained notoriety for organizing anti-Islam demonstrations, and LaVoy Finicum, who acted as spokesman for the group and was killed by police after he drove out of the refuge and tried to run a roadblock.

Gunmen took over the remote wildlife refuge to protest at the jailing of two local ranchers, Dwight Hammond and his son Steven, who were convicted of arson.

Their demands soon grew to include calls for the government to turn over area federal land to local ranchers. In Oregon, nearly 53 percent of the land is federally owned.

The older Bundy, whose other son Ryan was also arrested last month, is a vitriolic anti-government activist who in 2014 engaged in an armed standoff with federal authorities over unpaid cattle grazing fees at his ranch.
Last Update: Feb 11, 2016 1:24 pm
RELATED TOPICS