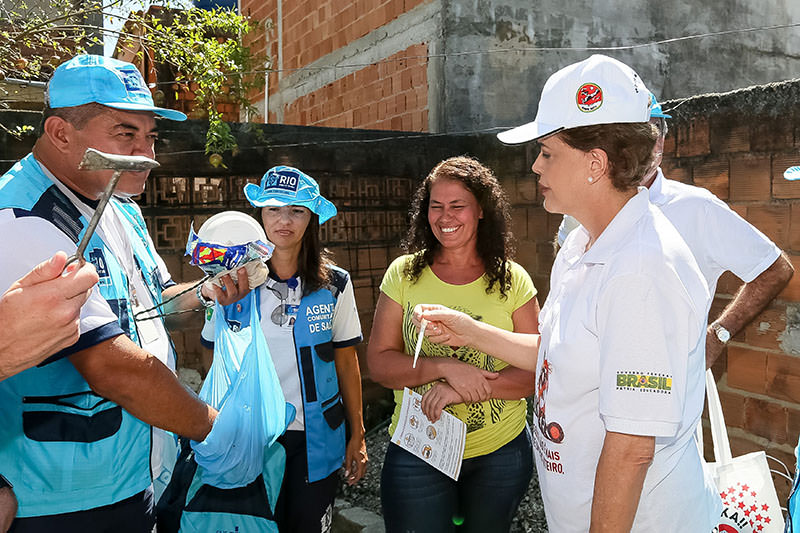 A hand out picture released by Brazilian Presidency shows Brazilian President Dilma Rousseff (R) taking part in an awareness campaign zika virus, Feb 13, 2016. (AFP)
by Feb 13, 2016 12:00 am
The presence of the Zika virus in Brazil won't compromise the Olympics in August, President Dilma Rousseff vowed Saturday as soldiers went door-to-door across the country to share key tips on how to stem the outbreak.

"The situation does not compromise the Olympics," Rousseff said. "We are confident that until the Olympics begin we will have considerable success in exterminating" the Aedes aegypti mosquito that transmits the virus.

Rio de Janeiro will host the Summer Games August 5 to 21, drawing athletes and spectators from around the world.

Brazil has been most affected by the outbreak that has spread rapidly through Latin America and the Caribbean, with 1.5 million people in the country infected since early 2015.

While it causes only mild flu-like symptoms in most people, Zika is strongly suspected of a rapid rise in the number of children born with microcephaly -- abnormally small heads and brains -- to mothers infected during pregnancy.

Multiple governments have urged women to avoid getting pregnant as researchers work to confirm whether Zika causes microcephaly and the neurological disorder Guillain-Barre syndrome.

Rousseff spoke to reporters after visiting houses in a suburb of Rio de Janeiro as part of the national anti-Zika campaign.

Early Saturday, some 220,000 soldiers fanned out across the vast South American country, part of the operation to knock on three million doors and distribute informational leaflets.

Warning that pregnant women were especially at risk, Rousseff urged all Brazilians to come together.

"The war depends on us," she said, accompanied by officials, health workers and a swarm of journalists.

Wearing a white cap and short-sleeve shirt with the slogan #ZikaZero, the president personally sprayed larvicide in areas where mosquitoes can breed.

"The government is taking the lead but that alone won't win the war," she said. "We need to get everyone involved."

Members of the three branches of the armed forces visited homes, restaurants and shops, sharing information on how to eradicate mosquito breeding areas that are found in everyday settings.

The troops handed out leaflets with the slogan "a mosquito is not stronger than an entire country," and advised residents to keep water tanks tightly covered, turn open bottles upside down and store tires in places where they won't collect water.

There is currently no cure or vaccine for Zika. Brazil has confirmed three deaths linked to the virus.

According to the latest data from the Ministry of Health, Brazil recorded 462 cases of microcephaly between October and February, compared with an annual average of 150 cases.

Forty-one of the cases have a confirmed link to Zika virus. Another 3,852 suspected cases of this birth defect were being studied.

The WHO has declared the rise in Zika-linked birth defects an international emergency.

Brazil's high-profile public awareness campaign kicks off as one of the country's top health officials warned that Zika is likely to spread to densely populated areas.

"This is the great fear of the immediate future -- that densely populated states will experience an intense outbreak of the virus that cannot be controlled," Claudio Maierovitch, head of the communicable diseases surveillance department at the Ministry of Health, told AFP.