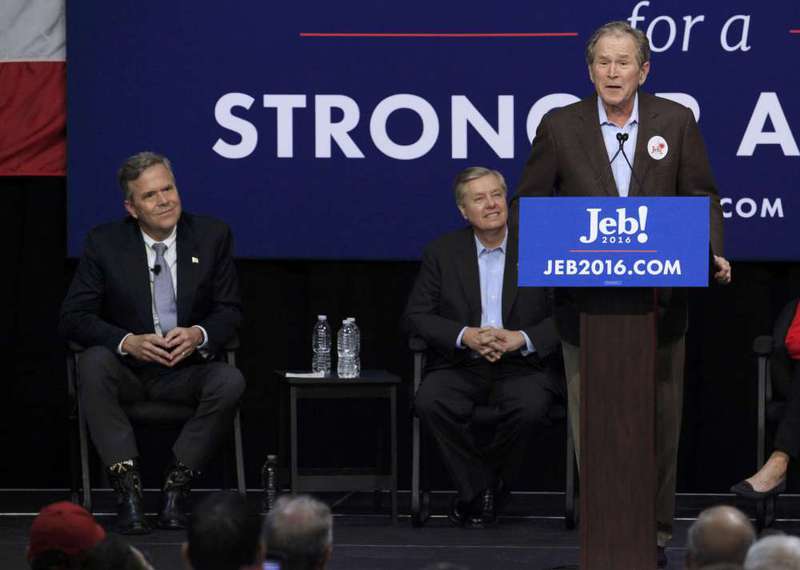 by Feb 17, 2016 12:00 am
Republican presidential candidate Jeb Bush has enlisted his brother, former President George W. Bush, to try to give him a lift as he looks for a strong showing in South Carolina's crucial primary.

The 69-year-old George W. Bush, who won the 2000 and 2004 Republican primary contests in South Carolina en route to presidential victories those years, was to appear with Jeb at a 6 p.m. EST (2200 GMT) rally in North Charleston on Monday, days before Republicans vote in the state on Saturday. The appearance of the elder Bush on the campaign trail is seen as helping Jeb with South Carolina Republicans who hold the former president in high regard. But it also carries some risks given his launching of the Iraq war in 2003, which ended up being unpopular with many Americans and which rival Donald Trump has seized on to criticize him.

George W. Bush's standing has risen among all Americans since he left power in 2009 and he has stayed on the sidelines of his brother's presidential bid, headlining private fundraisers but otherwise staying off the campaign trail.

That he is coming out now shows the urgency that Jeb Bush sees in a good performance in South Carolina. Bush finished in sixth place in the Iowa caucuses and in fourth place in the New Hampshire primary - the first contests in the state-by-state battles to pick a party nominee for the Nov. 8 presidential election.

Trump, who is the national front-runner in the Republican race and is leading in polls of South Carolina, scheduled an afternoon news conference in Charleston and was likely to criticize the Bush family anew.

At a debate of the Republican presidential candidates in Greenville, S.C., on Saturday, Trump accused George W. Bush of squandering trillions of dollars to wage the Iraq war over weapons of mass destruction that did not exist, and noted that the Sept. 11, 2001, attacks had occurred on his watch.

Jeb Bush, a former Florida governor whose studious demeanor and policy-heavy campaign is in sharp contrast to Trump's fired-up rhetoric said on Monday he sees Trump as attempting a hostile takeover of the Republican Party with positions that go against party doctrine, such as his proposed ban on Muslims entering the United States.

Bush has been the only Republican candidate to take on Trump consistently at the debates. He goaded the New York billionaire into angry outbursts in Greenville in the most acrimonious debate of the 2016 cycle.

"It was ugly, I guess. Part of it was related to the need to make sure people knew that Donald Trump is not a conservative and he got angry and, you know, kind of lost it a little bit," Bush told MSNBC's "Morning Joe" program.

"I went and shook hands with everybody at the end and I think he saw me coming to do it and he walked away, so he may be still angry about it," Bush said.