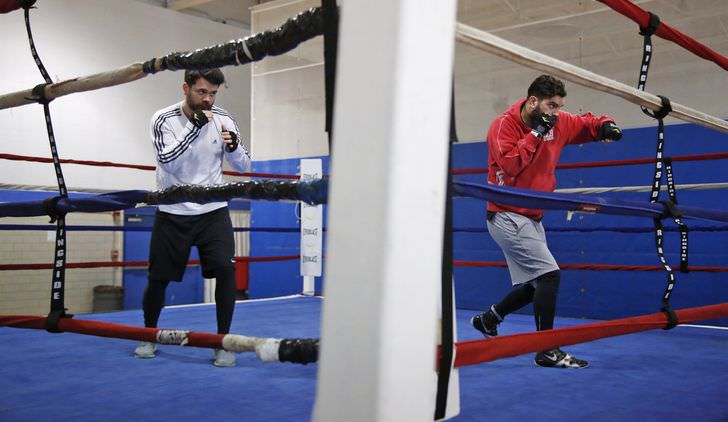 by Daily Sabah Feb 19, 2016 12:00 am
The Ahiska Turkish American Community Center is set to open a spacious gym and launch a boxing program for amateurs on Thursday while becoming a home for professional boxers in Ohio's Dayton city to build a bridge between cultures of Ahıska (Meshketian) Turks and Americans.

The pair of super middleweights Öner brothers arrived in Dayton on Sunday and got a warm welcome at the Community Center from the Ahıska Turkish community here.

Ahıska Turks settled in Dayton some 10 years ago after decades of oppression and forced displacement from their lands.

Once a group of six families, the Ahıska Turks has now become a large community with 400 families, 2,000 to 3,000 Turkish people overall.

The two Öner brothers and their dad, Murat — using their own growing vocabulary of English and an interpreter — said they are from "a total boxing family."

"Boxing is our life," Murat said.

The Ahıska Turkish American Community Center was established as the community grew. Today the is a well-maintained, thriving place that includes a nursery, meeting spaces, a mosque, a playground and now a boxing gym with a 20-foot ring, a dozen heavy bags and a row of speed bags along one wall.

"It's not just about sport itself," said Islom Shakhbandarov, the president of the Ahıska Turkish American Community Center and Pearson's partner in this project. "It's about building bridges between communities. That's one of the most important things here.