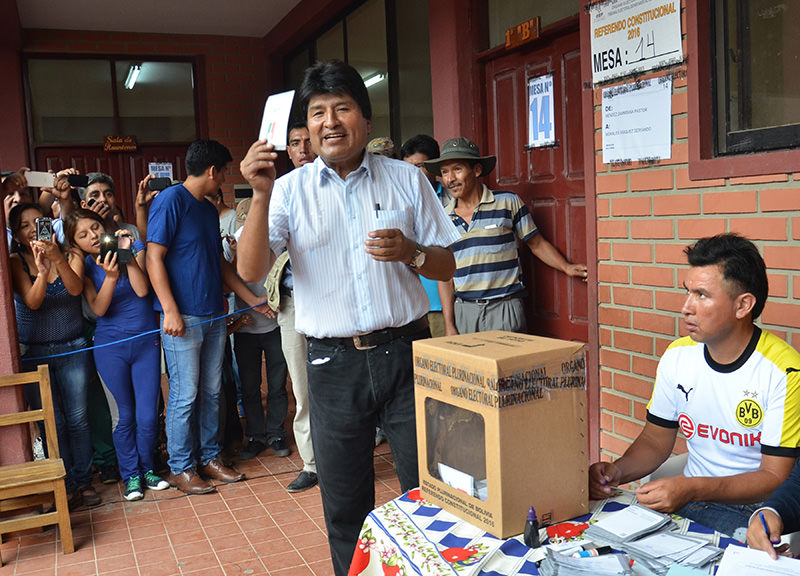 by Compiled from Wire Services Feb 22, 2016 12:00 am
Voters' eagerness for new blood in Bolivian politics and thinning patience with government corruption may make President Evo Morales' current term in office his last.

Early results Monday and an unofficial partial vote count indicated Morales' bid to extend his presidency by amending the constitution was headed toward a narrow defeat.

Morales promised Monday to respect the official result of a referendum on whether he can run for a fourth term, as early data indicated he risked losing. "We are going to respect the result, whether it be a No or a Yes. We always have respected it. That is democracy," he told a news conference.

"We are going to wait patiently for the final whistle from the electoral tribunal. We are optimistic," added Morales, a keen football fan.

Morales has governed for a decade. A "yes" vote in Sunday's referendum would have let Bolivia's first indigenous president seek a fourth term in 2019.

Morales canceled a news conference scheduled for Monday morning without explanation amid indications the vote count would be a long slog. International observers did not report any serious irregularities.

The referendum's timing could not have been worse for Morales. He was stung this month by an influence-peddling scandal involving a former lover and by a deadly incident of political violence.

Two unofficial quick counts by polling firms that looked at results from a sampling of polling stations said 52 percent voted "no." One firm, Ipsos-Apoyo, counted ballots at one in 15 polling stations.

Official vote counting was slow but not unusually so.

With 33 percent of polling stations reporting Monday morning the "no" vote stood at 63 percent. Vote reporting is traditionally slow from the countryside, where Morales is most popular, and the paper ballots were manually counted.

A frustrated Vice President Alvaro Garcia said at a news conference Sunday night that the vote was so far "a technical tie" too close to call.

"No one has won, nor has anyone lost," he said.

Morales has presided over an unprecedented economic boom as prices for raw materials soared just as he took office. He's credited with spreading Bolivia's natural resource wealth and empowering its indigenous majority during a decade in office.

He built airports, highways and the pride of La Paz, an Austrian-built aerial tramway system. He also put a Chinese-built satellite into space. Gross domestic product per capita income rose by nearly one-third, according to the International Monetary Fund, and a new indigenous middle class was born.

But the boom is over. Bolivia's revenues from natural gas and minerals, making up three-fourths of its exports, were down 32 percent last year. Economists say Morales leaned heavily on extractive industries to pay for populist programs and failed to diversify the economy.

The referendum also followed by days a political bombshell: A former lover of Morales was named sales manager of a Chinese company in 2013 that has obtained nearly $500 million in mostly no-bid state contracts. Morales denied any impropriety and his claim to have last seen the woman in 2007 was questioned when a picture of them together last year emerged.

The case deepened doubts about the integrity of Morales' governing Movement Toward Socialism, which has been wracked by scandals.

Adding to Morales' woes, six city workers died of smoke inhalation last week in El Alto, the teeming city adjacent to the capital of La Paz, in an attack blamed on pro-Morales agitators. The attackers torched documents that allegedly incriminated the previous mayor in payroll corruption.

Eusebio Condori, a retired schoolteacher, said he voted "no" because the scandal and the deaths "confirm that this government doesn't have a plan for Bolivia, only for itself."

A mother of three, Maria Espinoza, said she voted "no" because she believes in term limits. She echoed the complaint of others that too many jobs depend on political patronage.

South America's left has recently been sullied by scandal and punished at the ballot box in Argentina and Venezuela but Morales had personally remained unscathed.

His movement has been discredited, however, by the skimming of millions from the government-managed Fondo Indigena, which runs agricultural and public works in the countryside.

In addition, judicial corruption has been endemic and press freedom suffered as major news outlets were purchased by people friendly to the government. Critical media and environmentalists complained of harassment by the state.

Michael Shifter, president of the Inter-American Dialogue think tank in Washington, called the tight vote a surprising, major blow to Morales, who tallied more than 60 percent in his 2014 re-election.

"While few can deny that Bolivia has seen impressive economic growth and social progress under Morales' rule, many voters are sending a message that it is not enough. They are demanding clean government, accountability and more competitive politics," Shifter said.

Morales, who entered politics as a coca growers union leader, could now be motivated to groom a successor, he added.