Time photographer choked, slammed to the ground by US Secret Service at Donald Trump rally 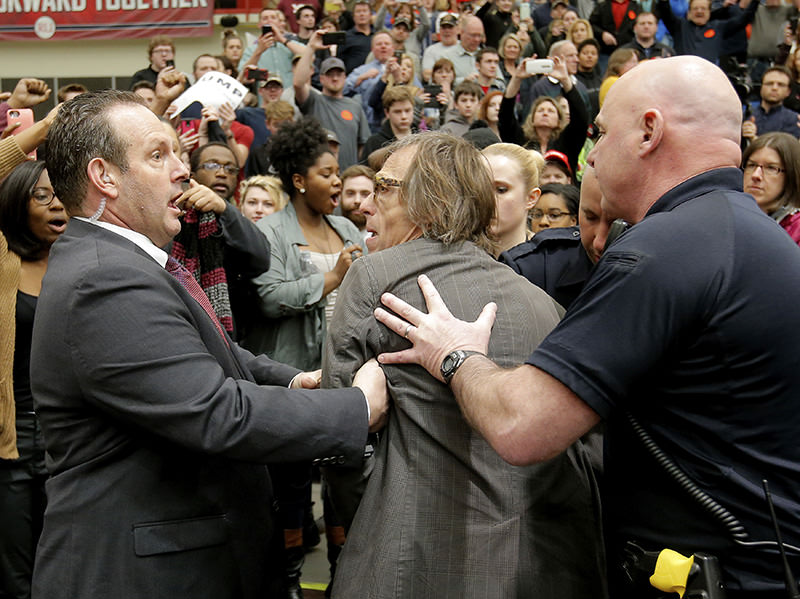 Photographer Christopher Morris is removed by security officials as Trump speaks during a campaign event in Virginia Feb 29, 2016 (Reuters)
by Daily Sabah with Reuters Mar 01, 2016 12:00 am

A Time magazine photographer trying to document the exit of dozens of black protesters from a Donald Trump rally was grabbed by the neck and shoved to the ground by a U.S. Secret Service agent

Photographer choked, slammed to the ground by US Secret Service at #DonaldTrump rallyhttps://t.co/MAhhOnebQ2 pic.twitter.com/3AdJ2P3XEx

A Donald Trump rally at Radford University in Virginia turned violent on Monday as the Time photographer Chris Morris -- who was on the fringe of an enclosed media section -- was seized by a U.S. Secret Service agent and thrown to the ground.

"I stepped 18 inches out of the (press) pen and then he grabbed me by the neck and started choking me and then he slammed me to the ground," Morris told CNN at the scene.

The Trump campaign said it was not aware of the details of the incident and directed inquires to local law enforcement.

Secret Service spokesman Robert Hoback said the agency was aware of the incident involving one of its employees but it still working to "determine the exact circumstances that led up to this incident."

The White House said on Tuesday: "The Secret Service is working with local law enforcement to try to get to the bottom of what exactly happened," White House spokesman Josh Earnest told reporters during a briefing. "The leadership of the Secret Service has indicated that they'll take appropriate steps based on the conclusion of that investigation."

The rally in southwestern Radford, Virginia, was repeatedly disrupted on Monday by protesters, including some from the Black Lives Matter movement, in a stark display of the divisions the Republican front-runner's presidential campaign has long been accused of sowing.

Hecklers disrupted the rally on a day when the New York billionaire fended off criticism that he had not clearly condemned white supremacist support during an interview on CNN on Sunday.

Trump taunted the protesters, shouting "Are you from Mexico?" at one of them. Supporters in the audience confronted the hecklers in angry, face-to-face exchanges.

As black protesters were escorted from the rally, the crowd around them began to chant, "All lives matter."

Trump waited for the scene to quiet down before saying, "Folks, you're going to hear it once: All lives matter." The crowd roared with applause.

Black Lives Matter is a civil rights movement that sprang from police shootings of black Americans in recent years.

The Trump rally took place on the eve of Super Tuesday, the biggest voting day in the race to pick the 2016 presidential nominees for the November election. A number of Southern states including Virginia are holding contests on Tuesday, and opinion polls show Trump is likely to consolidate his status as favorite to win the Republican nomination.

It was unclear whether Trump would be damaged by support from white supremacists. He has risen in opinion polls and won three of four early nominating contests while proposing a temporary ban on Muslims entering the country, calling Mexican immigrants criminals and insulting women.

His rivals for the Republican nomination, Ted Cruz and Marco Rubio, urged him to ask the New York Times to release a recording of his recent interview with its editorial board, following a report he told it he was not serious about his immigration proposals.

On Monday, the protesters disrupted Trump's remarks several times for long stretches, prompting him to shout to security guards several times, "Get them out please, get them out."

Trump appeared to relish the discord, saying after the turmoil in the crowd that his rallies were more exciting than those of the other candidates: "But it is fun, and exciting."

At a rally last week in Nevada, Trump also jumped into the fray with a protester when he said, "I'd like to punch him in the face."

Earlier on Monday, Trump's rivals criticized him for equivocating on white supremacist support when he was asked repeatedly on CNN if he would condemn the Klan and disavow support from white supremacists, including David Duke, a former Klan grand wizard from Louisiana.

Trump said that he had been hampered by a faulty earpiece during the CNN interview.

Duke on Monday denied that he had endorsed Trump. But he said he planned to vote for him and had advised his friends to do so too because of the candidate's views on immigration and world peace.

Duke told Fox News Radio he disapproved of Trump's "lip service" in support of Israel, but "I told my people to vote for him in the election" for strategic reasons. He said he had not been part of the Ku Klux Klan for nearly 40 years.

On the Democratic side, front-runner Hillary Clinton alluded to the country's divisions on Monday after a landslide victory on Saturday in South Carolina's primary shifted her attention from party rival Bernie Sanders to the candidate she may end up facing in November.

"I don't think America ever stopped being great," she told supporters in Massachusetts, adding a twist to Trump's "Make America Great Again" slogan. "What we need to do now is make America whole."
Last Update: Mar 01, 2016 9:53 pm
RELATED TOPICS