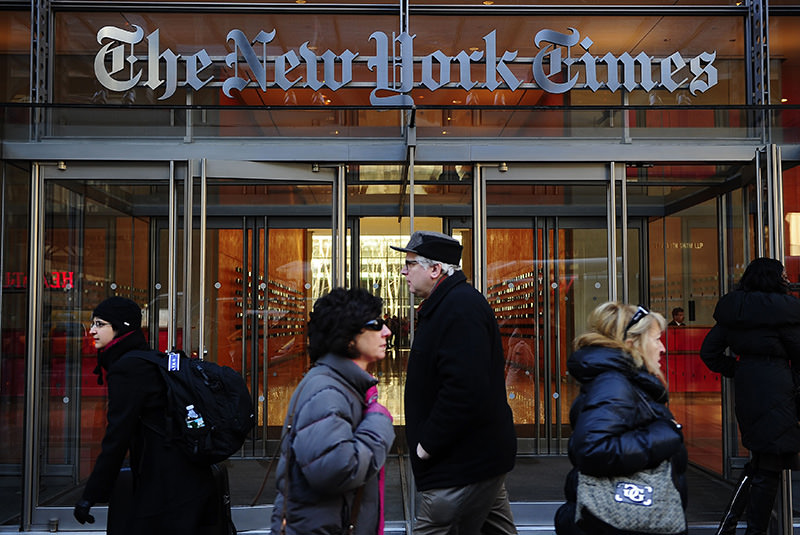 People walk by the entrance to US newspaper 'The New York Times' in New York, in this March 8, 2011 (AFP Photo)
by Mehmet Çelik Mar 05, 2016 12:00 am
A recent report released by a Toronto-based consulting firm has revealed that the western mainstream media portrays a negative and biased perception of Islam and Muslims in their headlines.

The report, titled 'Are Muslims Collectively Responsible? A Sentiment Analysis of the New York Times', has used The New York Times as a case study, making comparisons between the usage of the words Islam/Muslims and other words, such as alcohol, cancer, Yankees, Christianity, and Republican.

The report was prepared by using data from the New York Times from 1990 to 2014. It compared the headlines to "Identify the specific terms associated with Islam and Muslim, while simultaneously categorizing them as positive, negative or neutral". The report was prepared by making a comparative analysis with other key words, including Alcohol, Christianity, Cancer, Democrat, Republican and the New York Yankees.

Compared to other keywords used to make the comparison, the words Islam/Muslim scored the highest when it comes to implying negative connotations.

The report was prepared by the authors Owais Arshad, Varun Setlur, and Usaid Siddiqui, with Contributions from Jai Setlur, Di Yan and Steven Zhou, and published by the Toronto-based consulting firm 416Labs in November 2015.

The report indicated also that the words 'rebels' and 'militants' were the most frequently associated terms with the reference words Islam/Muslims.

"The words used to discuss Islam continue to propagate a distorted view of the religion and its followers. Without recognition of this, and a correction of this tendency, understanding one of the most important forces shaping modern history will continue to elude popular understanding. Governments in democratic societies are ultimately responsible to their electorates. If these electorates are consistently provided with a biased and opaque view of matters pertaining to critical issues, poor policy outcomes are inevitable," the report has said.

The report suggests that the usage specific words with negative connotations can shape the public opinion based on the usage of the word. In the case of the report's study of the New York Times, although it says that it does not argue NYT intentionally portrays Islam/Muslims negatively, it asserts that the usage of the terms Islam/Muslims negatively promotes perceptions that "Islam and its adherents are culpable for the violent actions of a few."
Last Update: Mar 05, 2016 11:28 pm
RELATED TOPICS