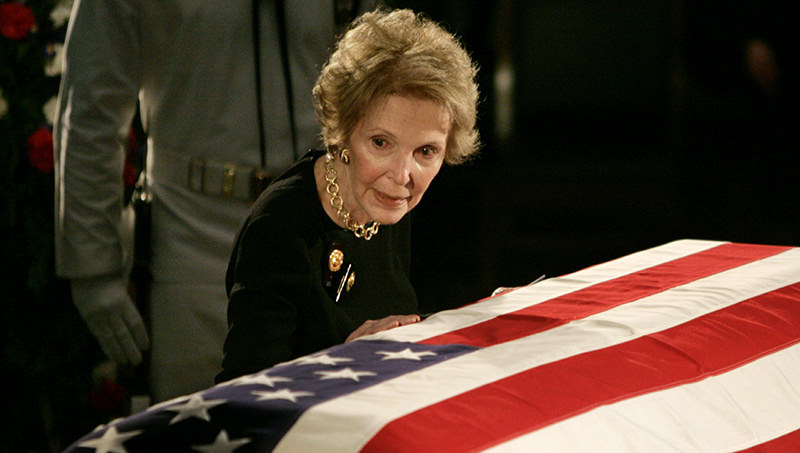 Former U.S. first lady Nancy Reagan touches the casket of her husband, former U.S. President Ronald Reagan as it lies in state in the rotunda of the United States Capitol in Washington in this June 9, 2004 file photo (Reuters Photo)
by Mar 07, 2016 12:00 am
Nancy Reagan, devoted wife and trusted confidante to late president Ronald Reagan who became the most ardent guardian of his legacy, died on Sunday, aged 94.

The former first lady, who suffered heart failure at her home in Los Angeles, will be buried next to her husband at the Ronald Reagan Presidential Library in Simi Valley, California, her spokeswoman Joanne Drake said.

Late in life, Reagan earned praise for many of the very qualities that saw her savaged by critics during Ronald Reagan's two White House terms from 1981-1989 -- her fierce protectiveness and outsized influence on the president.

Perceived as regal and cold, she was feared by White House aides who often found themselves butting heads with her over policy and personnel appointments.

She made her own mark as first lady with her signature "Just Say No" drug awareness campaign, launched in 1982.

But after she left the White House, as she nursed Reagan through his ten-year descent into Alzheimer's disease until his death in 2004, America softened its view of the former movie starlet.

"We remain grateful for Nancy Reagan's life, thankful for her guidance, and prayerful that she and her beloved husband are together again," the Obamas said in a statement.

Former first lady Barbara Bush said she was "totally devoted to President Reagan, and we take comfort that they will be reunited once more."

"Mrs Reagan was fiercely loyal to her beloved husband, and that devotion was matched only by her devotion to our country," said her son, former president George W Bush.

"Her influence on the White House was complete and lasting."

Former California governor and action movie star Arnold Schwarzenegger described her as "one of my heroes" who "served as first lady with unbelievable power, class and grace."

President Reagan is viewed as something of a patron saint of conservatives and the patriarch of the modern Republican Party, and the diminutive former first lady has wielded considerable political power as a succession of presidential hopefuls have sought her endorsement.

Born Anne Frances Robbins in New York on July 6, 1921 -- and given the name Nancy by her mother, Edith Robbins --Reagan's car salesman father left the family when she was young.

Edith toured the country as an actress, marrying prominent neurosurgeon Loyal Davis, and settling the family in Chicago.

Inspired by her mother, Nancy worked as an actress on stage and in film and television, and met Ronald Reagan while under contract with MGM.

They married in 1952 after Reagan divorced his first wife, actress Jane Wyman, beginning a marriage that has been described as a love story to rival any that the couple acted out on the silver screen.

The pair, who wrote passionate love letters to each other over the decades, had two children: Patti, born in 1952 and Ron, born in 1958.

She made 11 films in all, including three after her marriage, appearing alongside her husband just once, in her last role in "Hellcats of the Navy" (1956).

When Reagan went into California politics in the 1960s, Nancy recast herself as the ultimate political wife and confidante, serving as his first lady there from 1967-1975.

Only months after he took office as US president in 1981, Reagan narrowly survived an assassination attempt that spurred Nancy to take a keener role as her husband's protector, strictly controlling access to the president.

She sometimes set out to influence decision-making indirectly by taking her case to people her husband trusted. Other times, her role took on a bizarre twist as she consulted astrologers to guide administration policy.

"When she gets her hackles up, she can be a dragon," said former Reagan chief of staff Howard Baker, appointed after Nancy Reagan engineered the firing of his predecessor, Don Regan.

In a 1988 interview, Nancy said she was forced to exert her influence because her husband was poorly served by his aides, especially during the Iran-contra scandal that tarnished his reputation.

To the public, Nancy Reagan became best known for her glamorous designer clothes, Hollywood friends and reported social climbing, as well as her "Just Say No" anti-drug campaign.

Behind closed doors, her actions were much more important.

"Nancy wasn't popular and she operated under cover, usually through a surrogate," columnist Eleanor Clift wrote years ago in The Washington Post.

Clift said Nancy's "instinct for moderation drew her into debates over everything from social policy to US-Soviet relations" as she tried to protect her husband from right-wing influence.

After the Reagans left the White House in 1989, "tell-all" books by Regan and especially an unauthorized biography by Kitty Kelley, cast Nancy Reagan in an unflattering light, even alleging an affair with Frank Sinatra.

But in 1994 she played a key role in her husband's widely-praised disclosure that he had Alzheimer's and became a vocal campaigner for awareness of the disease.

"Ronnie's long journey has finally taken him to a distant place where I can no longer reach him," a rueful Nancy Reagan would later say at an Alzheimer's fundraiser.
Last Update: Mar 07, 2016 8:17 am
RELATED TOPICS