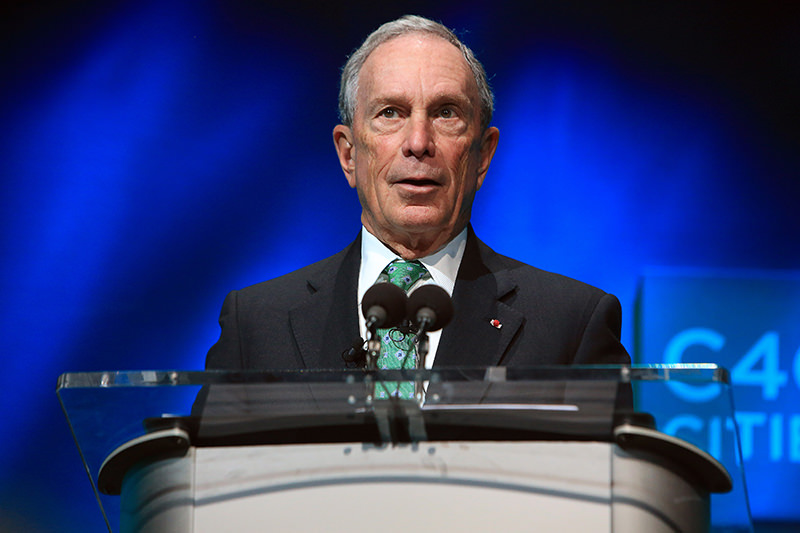 In this Dec. 3, 2015, file photo, former New York mayor Michael Bloomberg speaks during the C40 cities awards ceremony in Paris. (AP Photo)
by Mar 08, 2016 12:00 am
Former New York Mayor Michael Bloomberg said on Monday he would not mount an independent bid for the U.S. presidency, and criticized Democratic and Republican candidates for catering to the fringes of their parties.

A billionaire media mogul who combined business-friendly fiscal policies with liberal views on gun control and other social issues, Bloomberg could have potentially appealed to centrist voters in a year when candidates from the far left and far right of the political spectrum have gained traction.

But he said he worried that a three-person race would increase the changes that either Republican front-runner Donald Trump or his party rival U.S. Senator Ted Cruz could win the White House.

"That is not a risk I can take in good conscience," he wrote on Bloomberg View, an opinion Web site that is part of his media empire.

About 12 percent of likely voters said they would support him in a three-way race for president with Democrat Hillary Clinton and Trump, according to a Reuters/Ipsos national poll from March 2 to 7.

Bloomberg said Trump, a billionaire real estate mogul who is leading the battle to win the Republican nomination for the Nov. 8 election, has backed policies that would undermine religious tolerance and threaten national security.

"He has run the most divisive and demagogic presidential campaign I can remember, preying on people's prejudices and fears," Bloomberg wrote. He said Cruz, a conservative from Texas, was divisive as well.

Bloomberg also hit out at Clinton and her rival for the Democratic nomination, U.S. Senator Bernie Sanders from Vermont, for criticizing free trade and the financial industry.

"Extremism is on the march, and unless we stop it, our problems at home and abroad will grow worse," he wrote.

Spokespeople for Trump and Cruz did not immediately respond to requests for comment about Bloomberg's criticism.