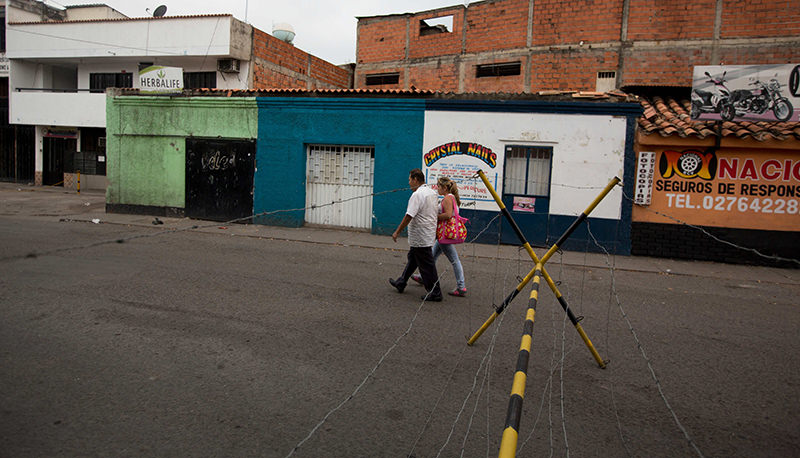 In this March 1, 2016 photo, Colombian national Diego Gonzalez, left, and his daughter Maria, cross the border into Colombia from Urena, Venezuela, as he makes his way to his dialysis treatment. (AP Photo)
by Associated Press Mar 09, 2016 12:00 am
They gather by the hundreds at border bridges before dawn, in wheelchairs and surgical masks. They clutch X-rays and bundles of medical records they hope will persuade Venezuelan officials to let them join the few allowed to cross into Colombia each day.

Six months after Venezuela's socialist government shut its border with Colombia to fight smuggling, thousands of patients continue to make an arduous trek to get treatment in Colombian hospitals.

The closure has reshaped daily life for everyone along the frontier, but for sick Venezuelans hoping to escape their country's collapsed medical system, the consequences have been painful and sometimes deadly.

Dany Cubides, a 33-year-old dialysis patient, collapsed early this year on the bridge connecting this town of brightly painted shacks with the Colombian city of Cucuta as he made his way back home after treatment.

Before the border closing, the trip had taken him 30 minutes on a motorcycle. But vehicles are no longer allowed to pass between the two countries, and patients who get special permission to cross must do so on foot.

Cubides' trips to a dialysis center in Cucuta turned into multi-hour ordeals that left him too tired to eat dinner. He gave up his job as a city gardener. Then, one hot afternoon shortly after New Year's Day, he stumbled and fell on the bridge. He was dead by the time he arrived at a Cucuta hospital, his medical records and death certificate show.

"This never would have happened if not for the closure. It was day after day of fatigue for him," said his mother, Elvira Cubides, wiping away tears. "This country has lost its heart."

Perhaps the only thing worse than slogging to a clinic in Colombia is slogging through the Venezuelan health care system, which is beset by the economic chaos ravaging the country as a whole. Public hospitals here no longer have consistent running water and electricity, and medical supplies are scarce. The country is making due with 20 percent of the medications it requires, according to the opposition-leaning pharmaceutical association.

In San Cristobal, the Venezuelan city closest to Urena, six infants died during a single week in February because of a lack of respiratory machines. This month, a congressman accused the city's largest hospital of using expired drugs. Private clinics run their dialysis machines in three shifts to accommodate as many people as possible, and still have no room for new patients.

Noe Leal, a 66-year-old taxi driver in Urena whose kidneys are failing, shuns San Cristobal's chaotic hospitals, preferring instead to grapple with officialdom as he crosses the border three times a week for treatment in Cucuta.

He wakes with his roosters before dawn and braces himself for an interrogation at the border checkpoint despite having the proper papers, and then the long walk across the 1,050-foot (320-meter) bridge spanning the Tachira river.

"You feel like you're filled with liquid, and your legs don't want to move. But you have to walk or you won't get your treatment," he said.

As a terminal patient, Leal was able to get permanent permission to cross. Most Venezuelans have to apply for a one-day pass the morning of their appointments.

Officials issue about 200 medical passes a day for this town of 40,000 people. Patients stood in line for hours last week only to find the National Guard had added new requirements. The director of the permissions center was as outraged as they were.

"They're playing with people's lives, making grandfathers, people who can barely walk, come and wait like this all day," center director Luis Hernando said, drawing cheers.

The National Guard says smuggling of price-controlled gasoline and food into Colombia, where it can be sold at much higher prices, has fallen 70 percent since President Nicolas Maduro declared a state of emergency along the 1,400-mile (2,260-kilomber) border last August. Officials on the Colombian side also say the tide of cheap Venezuelan goods has slowed.

Before the border was shut, more than 100,000 people daily used the two main crossings in the region that includes Urena, according to the Venezuelan government. That number has shrunk to just 3,000 a day, nonprofit groups working in the region say.

In addition to the sick, Venezuela allows students, some workers and any Colombians wishing to self-deport to cross.

Parents leading small children in school uniforms and sleepy undergraduates join the sick in trying to get through the barbed-wire checkpoints early. By 8 a.m., confusion reigns.

On one recent morning, a National Guard officer told a family hoping to enroll their daughter in a Colombian high school that they would have to go to a different crossing. Asked why, he responded, "Because I say so."

An HIV patient was turned away for failing to bring his complete medical history, and left grumbling that each soldier creates his own laws.

Deli worker Olga Burgos was rejected because an oncologist wrote the wrong date on paperwork for her appointment. "I'll have to just try again tomorrow," she said.

Libia Zulay blames the whims of border guards for the death of her 3-year-old grandson Jheancarlo, who had leukemia.

Shortly before Christmas, the toddler went into convulsions in his crib. Zulay rushed him to a clinic in Urena, but staff told her only the hospitals across the border would be able to help. Guards at the checkpoint said the family had to wait until the crossing opened at 6 a.m.

The family decided against risking an illegal crossing in a motorboat at night. They waited, taking turns holding the boy in their arms as his lips turned blue and gaze faded. He died the next day in Cucuta, according to his medical records and death certificate.

"I was desperate, crying and pleading all the way up the chain of command for them to let us cross," Zulay said. "I was astonished they would gamble with the life of a child like that. One day they will have to pay for the dead."
Last Update: Mar 09, 2016 7:39 pm
RELATED TOPICS