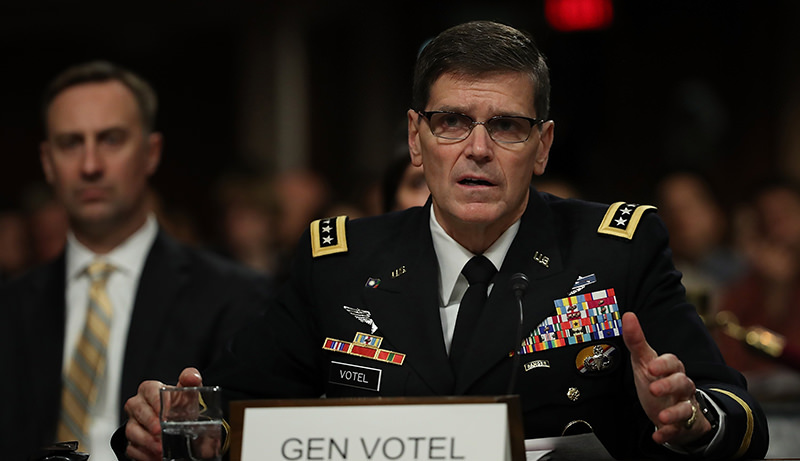 U.S. Army Gen. Joseph Votel, nominee to be the next commander of the U.S. Central Command, testifies before the Senate Armed Services Committee March 9, 2016 in Washington, DC. (AFP Photo)
by Anadolu Agency Mar 09, 2016 12:00 am
The Army general nominated to oversee U.S. forces in Syria and Iraq vowed Wednesday to review Washington's anti-Daesh strategy, citing concerns over a lack of "a political element" to support the military's strategy.

"I do have concerns about our broader strategy against ISIL [Daesh], about how we are applying resources, about how we are focusing our authorities, about how we are leveraging all of the required instruments of government and of our own and of our partners in going after that," Joseph Votel told the Senate Armed Services Committee during his nomination hearings to head U.S. Central Command (CENTCOM), which oversees American forces in the Middle East.

Votel, who currently serves as commander for American Special Operations forces, told lawmakers that the military approach to the fight against Daesh in Iraq and Syria is only one side of the multi-dimensional problem.

"I am concerned about how we approach this moving forward in Syria without a political element to support that," he said, noting Syria's difference with Iraq in terms of lacking a governing body.

"I intend, if confirmed to this position, to look very carefully at our strategy to ensure that it has the coherence that is required."

Votel's comments came one day after he told the same committee that U.S.-backed forces in Syria can recapture Raqqa from Daesh but that retaining the militant stronghold will be difficult.

Defending outgoing CENTCOM head Lloyd Austin's proposal to resume a train-and-equip program for Syrian rebels, Votel said the new program would be different from its predecessor in terms of focus and scale.

He said that the coalition would recruit fighters from among the groups primarily fighting Daesh and unlike the previous program, which tried to raise a large force in a short time, this one would train small groups.

He added, however, the lack of a political entity linked to the previous program made it difficult to succeed.

One senator, citing how forces of the YPG terror group attacked a U.S.-backed opposition group, asked Votel whether he believes attacking a group backed by the U.S. would disqualify it from Washington's support.

"Yes, I do," the general responded. "I think it works contrary to our purposes in terms of what we're trying to accomplish."

YPG is the armed wing of the PYD -- the Syrian branch of terrorist organization PKK which has targeted Turkish security forces as well as civilians since 1983.

On Afghanistan, Votel told lawmakers the situation in the country is deteriorating with the upsurge of the Taliban in recent months.

He also agreed with Sen. John McCain that it would be logical to push for a "conditions-based withdrawal of U.S. troops as opposed to a calendar-based" one.