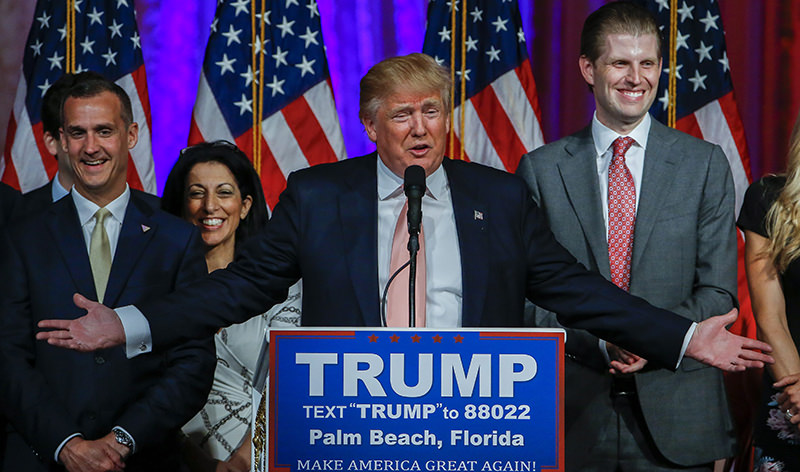 Republican 2016 US presidential candidate Donald Trump (C) speaks at an election campaign event inside a ballroom of the Mar A Lago Club in Palm Beach, Florida, USA, 15 March 2016 (EPA Photo)
by Associated Press Mar 16, 2016 12:00 am

Donald Trump scored victories Tuesday in three states, including the big-prize Florida, but lost Ohio to the state's governor, John Kasich, as the billionaire continued to move ahead in his campaign for the Republican presidential nomination. Hillary Clinton won at least four states, dealing a severe blow to Bernie Sanders' bid to slow her march toward the Democratic nomination.

Marco Rubio, the Florida senator who staked his once-promising campaign on winning in his home state, dropped out of the presidential race shortly after the polls closed. That leaves Kasich as the last true establishment candidate running against Trump and arch-conservative Texas Sen. Ted Cruz.

Trump, the brash and controversial reality TV star, has upended Republican politics by winning most of the state-by-state competitions for delegates who will choose the party's nominee. He has seized on Americans' anger with Washington politicians, discomfort with immigration and fears of terrorism, attracting voters with his blunt talk and simply worded promise to make America great again.

Tuesday's votes in five states had been viewed as a pivotal moment in the Republican presidential campaign. For the first time, two states Ohio and Florida had winner-take-all contests. A Trump sweep could have given him an insurmountable lead in the delegate count.

Trump won the biggest prize all 99 Florida delegates as well as winning North Carolina and Illinois, and was locked in a tight race with Cruz in Missouri. He told a victory rally in Florida, "This was an amazing night."

But Kasich's win, capturing all of Ohio's 66 delegates, was crucial to keeping alive the hopes of mainstream Republicans trying to stop Trump.

While Trump had amassed the most delegates going into Tuesday, he's won fewer than 50 percent of them. If that pace continues, he would fall short of the majority that he would need to assure him the nomination at the party's convention in July. The result could be a contested convention, creating an unpredictable outcome.

This was the first victory for Kasich, whose upbeat message and long record of government service has had little resonance as his rivals seized on voters' anxiety and disdain for Washington. While he could benefit from Rubio dropping out, he remains an extreme longshot for the nomination, though he could help keep Trump below the 50 percent threshold.

Cruz said at a Houston rally that the battle for the Republican presidential nomination battle was a "two-person race" between himself and Trump. He did not mention Kasich by name.

Trump now has 619 delegates. Cruz has 394, Kasich 136 and Rubio left the race with 167. It takes 1,237 delegates to win the Republican nomination for president.

In the Democratic race, Clinton's victories in Florida and North Carolina were expected, but Sanders, a Vermont senator and self-described democratic socialist, had hoped to take the industrial states of Ohio and Illinois, both of which Clinton won. He criticized the former secretary of state for her past support for trade deals. Sanders is unlikely to overtake Clinton in the delegate count, but his victory last week in Michigan underscored the unease that many Democratic voters have about her candidacy.

Sanders' only chance to avoid being swept was in Missouri, which remained too close to call.

With her wins Tuesday, Clinton put herself in a commanding position to become the first woman in U.S. history to win a major party nomination.

Overall, Clinton has at least 1,488 total delegates including superdelegates, who are elected officials and party leaders free to support the candidate of their choice. Sanders has at least 704 delegates when the count includes superdelegates. It takes 2,383 to win the Democratic nomination.

At a victory rally in West Palm Beach, Florida, Clinton pivoted quickly to the November election by assailing Trump's hardline immigration positions and support for torture. "Our commander-in-chief has to be able to defend our country, not embarrass it," she declared.

Trump has alienated many Republicans and Democrats alike with his disparaging remarks about Mexicans, Muslims and women, among others. He entered Tuesday's primaries embroiled in one of the biggest controversies of his contentious campaign. He has encouraged supporters to confront protesters at his events and is now facing accusations of encouraging violence after skirmishes at a rally last week in Chicago that he ended up cancelling.

"I don't think I should be toning it down because I've had the biggest rallies of anybody probably ever," Trump said Tuesday on ABC's "Good Morning America." ''We have had very, very little difficultly."

Rubio and Kasich have suggested they might not be able to support Trump if he's the nominee, an extraordinary stance for intraparty rivals. All of the Republican candidates had earlier pledged to support the nominee.

Now thrust into the center of a campaign that has been bitingly personal, Kasich vowed to cheering supporters in Berea, Ohio, that he would "not take the low road to the highest office in the land."

Trump has been the target of millions of dollars in negative advertising in recent weeks, including one ad campaign that highlights his statements that appear to encourage violence among them, "I'd like to punch him in the face."