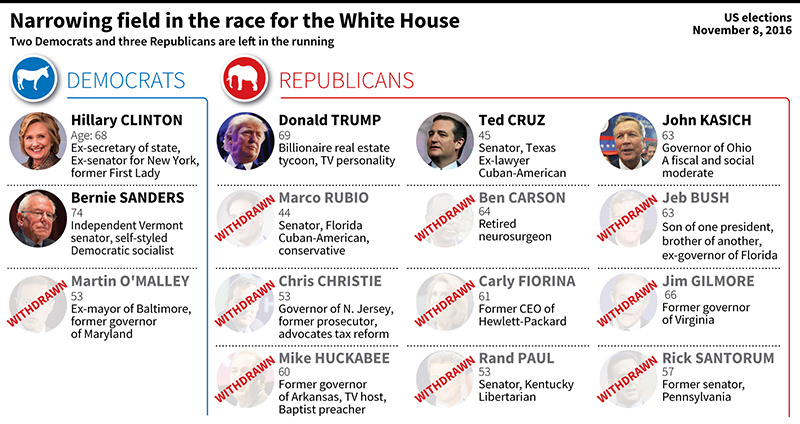 Updated graphic showing Democrat and Republican candidates in the race for the White House. (AFP Photo)
by Mar 16, 2016 12:00 am

When stumping for the White House, the leading candidates in the U.S. presidential race use words and grammar typical of children in middle school, with Donald Trump the worst offender, researchers say.

The Language Technologies Institute at Carnegie Mellon University in Pittsburgh found that most candidates use words and grammar typical of pupils in grades six to eight -- when children are typically aged 11 to 13.

Trump, his closest Republican rival Ted Cruz, Democratic frontrunner Hillary Clinton and her left-wing challenger Bernie Sanders have deployed simpler language as the campaign has gone on, the researchers found.

An analysis shows that Abraham Lincoln, widely considered one of America's great leaders -- the Republican who abolished slavery -- outclasses all the candidate and more recent presidents by displaying grammar at 11th grade level.

The most recent Republican president, George W. Bush, who ordered the invasion of Iraq and was frequently mocked for use of language, had grammar at grade five level -- below that of Trump, the researchers found.

Trump and Hillary Clinton's speeches showed the greatest variety, suggesting they may work harder than others in tailoring remarks to particular audiences, said Elliot Schumacher, a graduate student who worked on the study.

When it came to grammar, the 2016 candidates generally had scores between sixth and seventh grades, with Trump just below sixth grade. Bush scored at a fifth grade level, the report found.