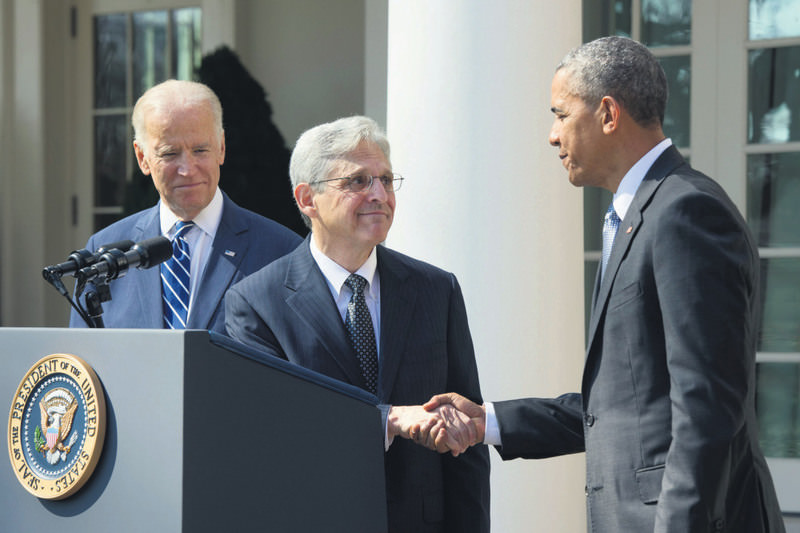 Ignoring Republican threats, U.S. President Obama chose centrist judge Merrick Garland for a pivotal vacancy on the Supreme Court, thrusting a respected moderate jurist and former prosecutor into the center of an election-year clash over the future of the nation's highest court

Supreme Court justices are appointed for life and the body's rulings can exert a powerful influence on major social issues in America. Obama said Garland's experience - from prosecuting the Oklahoma City bomber Timothy McVeigh to serving as a clerk for late Justice William Brennan - "have earned him the respect and admiration of leaders from both sides of the aisle."

Standing at Obama's side during a ceremony in the Rose Garden, Garland became emotional as he described his humble upbringing in Chicago, and vowed to be faithful to the U.S. constitution if confirmed for "the greatest honor" of a Supreme Court seat. "Trust that justice will be done in our courts without prejudice or partisanship is what, in a large part, distinguishes this country from others," Garland said. But Republicans fear Garland will tip the even balance of the court toward liberals and have vowed to refuse him even a Senate confirmation hearing.

Senator John McCain said that Obama's "lame-duck" presidency should leave the appointment to the next president, who will take office in January next year. "I believe the American people must have a voice in the direction of the Supreme Court by electing a new president," he said.

Obama - himself a former constitutional law professor - made an impassioned case for Republicans to reconsider. "I simply ask Republicans in the Senate to give him a fair hearing," he said. "If you don't, then it will not only be an abdication of the Senate's constitutional duty, it will begin a process that is beyond repair.

"Our Supreme Court really is unique. It's supposed to be above politics. It has to be," said Obama, warning that to deny Garland a hearing "would be unprecedented."

The deadlock sets the stage for an election-year showdown with Republicans that will see both sides attempt to increase the electoral costs for their opponents. The White House is betting that public pressure may force some Republican Senators - including ones who face reelection in November - to reconsider their position.

Polls show a sizable majority of Americans - 63 percent - believe that the Senate should at least hold hearings on Obama's nominee, against 23 percent who believe otherwise. The White House is already relentlessly probing for weaknesses in the Republican's so-far unified position.

Officials gleefully noted that Senate Judiciary Committee Chairman Chuck Grassley, a Republican, has agreed to meet Garland Thursday, after party leaders said they would not do so.

Garland's appointment leaves Republicans with a tough task of ignoring someone already confirmed by the Senate once for lower office and who has publicly opposed the judicial activism they claim to resist. Republican Senator Orrin Hatch, who voted for Garland to the DC circuit court and once suggested he could be appointed to the Supreme Court, defended his current opposition. "He's a good man," said Hatch. "But he shouldn't be brought up in this toxic environment. I'm tired of the Supreme Court being used as a battering ball back and forth between both sides. That's why I'd put it off until next year, whoever is president it'll be fair."

Questioned about his vote, Hatch responded "that was 19 years ago!" At the age of 63, Garland would offer Republicans the tantalizing prospect of a candidate who could be expected to serve less time on the bench than some of the younger names floated.

With Hillary Clinton leading in the polls ahead of November's general election, they also face the possibility that their success in opposing him could lead to a more left-leaning nominee being appointed next year. Clinton described Garland as "a brilliant legal mind" who deserved "a full and fair hearing followed by a vote," but she stopped short of endorsing him.

Scalia, 79, was the intellectual leader of the court's conservative faction. His death abruptly ended the conservatives' 5-4 advantage on the high court, giving Obama an opportunity to appoint his third justice after Sonia Sotomayor and Elena Kagan. When Scalia died in February, replacement of him has become a part of presidential race.

Garland is a graduate of Harvard College and Harvard Law School and he made his reputation after overseeing the investigation and prosecutions in the Oklahoma bombing case in 1995.