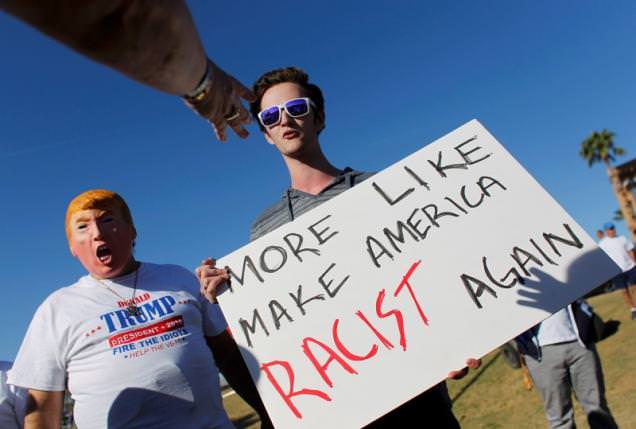 Protesters blocked a main road in Arizona while hundreds of people held protests in New York City chastising Trump’s inflammatory rhetoric. Many indicated that Trump has serious implications for the future of America with his racist, xenophobic and Islamophobic stance

Hundreds protested Republican president candidate Donald Trump in New York City and blocked a major road Saturday in the southwestern state of Arizona, where a demonstrator was punched and kicked at a rally.

The latest attempts by opponents to disrupt the campaign of the top United States Republican White House hopeful resulted in a handful of arrests, police and witnesses said. In Tucson, Arizona, a protester with a sign showing Trump's face and the words "Bad for America," was kicked and punched by a member of the audience while being escorted out of the venue by security, video posted online by NBC showed. The network reported that the audience member was handcuffed and taken away before being charged with assault with injury, according to police. Meanwhile, on the other side of the country, demonstrators who gathered at Manhattan's Columbus Circle in New York City, near one of the billionaire real estate mogul's luxury buildings overlooking Central Park, shouted the slogan, "Donald Trump, go away! Racist, sexist, anti-gay!"

Amid a considerable police presence, protesters held up signs that read "Deport Trump" and "Build a wall around Trump." Also spotted in the crowd were placards that read "Don't let bigotry Trump our constitution" and "Will trade 1 Donald Trump for 25,000 refugees." At least one person was arrested on the city's famous Fifth Avenue during a brief skirmish that was quickly brought under control by police. The demonstration was organized by a group called Cosmopolitan Antifascists, with others joining in.

Ordinary New Yorkers turned out for the event, concerned by Trump's status as the clear frontrunner for the Republican Party's nomination ahead of November's presidential elections. Trump "is racist, he is sexist, he is homophobic, he is Islamophobic, xenophobic, he is a fascist. It has serious implication for the future of America," Patrick Waldo told Agence France-Presse (AFP). "If we start closing our borders to some people based on their religious beliefs, that is completely unconstitutional … we start going to a World War II Germany-kind of situation and I don't want that in my country," the 31-year-old historian added.

Trump has called for a ban on all Muslims entering the United States, just one example of rhetoric by the candidate that has sparked controversy on the 2016 campaign trail. "Everything he says is racist, is false. It hurts my feelings," said Nour Hapatsha, a 22-year-old Muslim born in the United States.

Ahead of Trump's Tucson event, Arizona protesters blocked a major thoroughfare on the outskirts of Phoenix, in an attempt to prevent his supporters from reaching an area rally. Trump was in the state ahead of its primary, which will be held on Tuesday. The estimated 50 protesters held a banner across the width of Shea Boulevard with the words "Dump Trump" as long lines of traffic backed up in the suburb of Fountain Hills.

Controversial Maricopa County Sheriff Joe Arpaio, who openly endorsed and supports Trump, said he would do everything possible to ensure the event would go ahead – and Trump subsequently took the stage. Deputy Joaquin Enriquez told AFP that three people were arrested and that two vehicles were towed. "These arrests were made because they were blocking a public roadway, not for protesting," he said.

Demonstrations and violence have broken out at several Trump events recently, with critics saying the businessman's inflammatory rhetoric and barely-veiled threats directed at protesters have been fueling an increasingly toxic atmosphere surrounding his rallies.

In January, just four weeks before the opening of the 2016 primary contest, Trump sparked a global backlash after he called for a "total and complete shutdown" of all Muslims entering the U.S. He also called for a wall to be built along the southern border to block out Mexicans, whom he called "rapists" while launching his presidency bid at Trump Tower in New York City in June 2015. Trump's proposal to ban Muslims has been condemned by Republicans and Democrats alike as being un-American and counterproductive, yet his hardline approach on immigration has fueled his popularity among the overwhelmingly white Republican primary electorate.