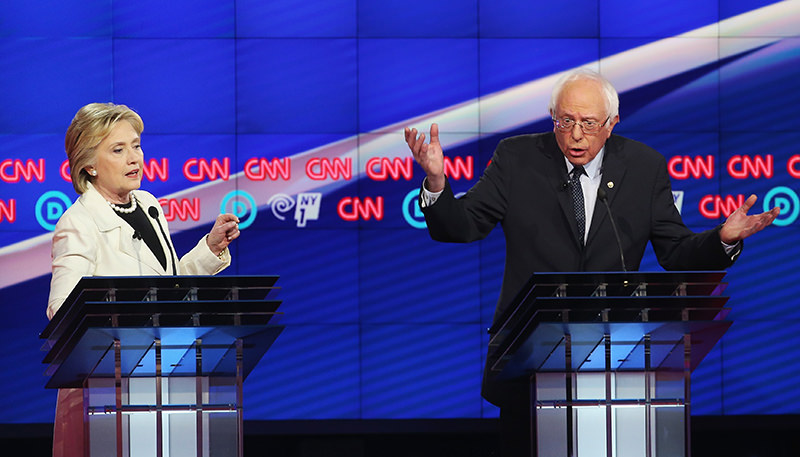 Asked if he thought Israel's attacks, which killed nearly 1,500 civilians and wounded 10,000 more, were disproportionate, Sanders said he believed they were.

When Clinton was asked the same question, she said, "I don't know how you run a country when you are under constant threat," referring to Israel.

"You evaded the answer," Sanders, who is Jewish and worked on an Israeli kibbutz, or traditional collective farm, responded.

"In the long run if we are ever going to bring peace to that region, which has seen so much hatred and so much war, we are going to have to treat the Palestinian people with respect and dignity," he added to raucous applause.

The exchange was part of a heated two-hour debate in New York just five days before the state goes to the polls in critical primary contests.

The candidates laid bare their differences on a wide variety of issues ranging from Wall Street reform, to minimum wage policy and clean energy, oftentimes eliciting rounds of applause and chants from supporters.

The debate got so disorderly that at one point CNN moderator Wolf Blitzer had to cut in to remind the candidates that "if you're both screaming at each other, the viewers won't be able to hear either of you."

In a particularly bitter moment, Sanders said Clinton's use of the term "superpredator" when she was first lady was "a racist term and everybody knew it was a racist term."

He also took issue with her support for the invasion of Iraq, and support when she was Secretary of State, for U.S. operations that helped oust former Libyan dictator Muammar Gaddafi.

Clinton, however sought to take Sanders to task on his record on gun control, which she paints as lax.

"It's not a laughing matter," Clinton said after Sanders laughed off her accusations. "I take it really seriously because I have spent more time than I care to remember being with people who have lost their loved ones."

Clinton continues to lead in pledged and super delegates. But the Sanders campaign has recently picked up momentum, winning seven of the last eight races.

Nearly 300 delegates are up for grabs next Tuesday in New York, and the candidates have devoted significant time and energy to winning the state.

A win could help Sanders narrow a gap of about 220 pledged delegates.

A total of 2,383 delegates is needed to secure the Democratic nomination.